Saving a plane from the river


The rising waters of the Mississippi River are threatening cities, towns and communities for hundreds of miles along its banks. One aircraft owner didn't receive a warning to remove his aircraft from an airfield threatened with flooding until it was too late. He had to make other arrangements.

I always wanted a plane on floats but this is not what I had in mind. 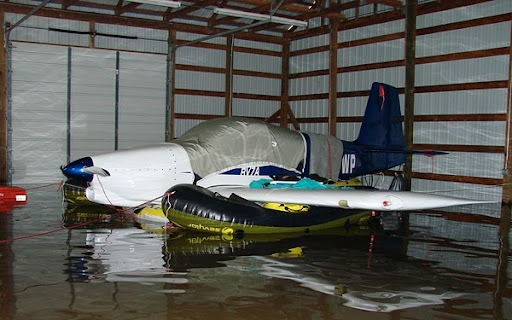 These pictures were taken on Tuesday, the water has risen another 14+ inches since. By the time I received the call, it was to[o] late, I could not fly the plane out, I was at mother natures mercy. We met at Ed's house yesterday and ended up using a quad to pull the boats to a point to get them in the water to get back to the airport. We had to cross [a] wheat field to accomplish this. By the time I got to the plane yesterday, it was in a nose down configuration but floating. The engine was not under water, yet. 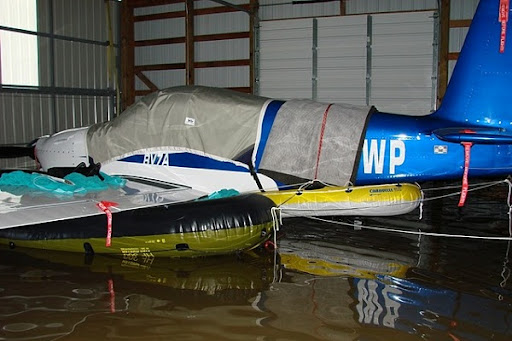 I added two more floats, one under each wing, and one more under the nose to help level it. The water was very cold and the outside air temp was not much better. The water is nasty, it is filled with gas, oil, sewage, snakes, and I can't forget about the leeches. At this time I am totally dependent on the floats. If I could get the door open I would attempt to float it to dry ground but seeing that there really is not much of that either then there is no [sense] even trying. I cannot really complain to[o] much because there are a lot of people losing there homes. It is a hard thing to watch and witness. Some of us ... lost a home in hurricane Andrew so we know the feeling.

I hope the aircraft's owner manages to keep it afloat until the water recedes. That may take several weeks, but if only his plane's undercarriage gets wet, he should be able to lubricate the bearings, add grease where necessary, and be good to go.

There are many people losing their possessions right now. Some will be OK, but others (uninsured, or uninsurable) won't. Please keep them in your thoughts and prayers.

Have you been effected by the flooding?

No, we're well out of the path of Ole Miss, fortunately. However, the Cumberland River is nearby, and that flows into the Ohio, which in turn feeds the Mississippi . . . so we've also got more water than usual in our vicinity.

That's a Navion, the 2-seater civvie mod of the P-51, isn't it? I didn't click on the link to read - I live in Minnesota and we've had our share of flood stories this year - but that tail shape is distinctive.

Steve, it's a Van's Aircraft RV-7A, a kit-built experimental aircraft, very popular with the home-builder market.

You're right about the tail - very reminiscent of the P-51, isn't it? I wonder whether Richard VanGrunsven deliberately designed it that way?