A clergyman in England has come up with a novel way to commemorate shuffling off this mortal coil.

A vicar who calls himself 'heaven's angel' has celebrated setting the inaugural world record for a motorcycle hearse when he clocked just over 114mph on an airfield runway.

The Rev Ray Biddiss, 57, had to reach a speed of more than 80mph at Elvington Airfield, near York, in his specially built 'trike-hearse' to be recognised by Guinness World Records.

And the clergyman, from Halifax, West Yorkshire, managed to hit 114.1mph in The Rocket, which he says he uses for real funeral services.

The Rocket is a Triumph Rocket III with a 2.3 litre, three cylinder engine built by Liversedge-based DTB Panther Trikes to Mr Biddiss's specifications and within the relevant road traffic regulations. 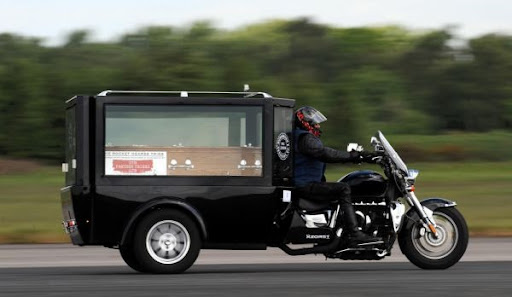 The unique hybrid trike-hearse merges the body of the British-made 2008 Triumph Rocket III trike conversion with a coffin carrier to create a sleek black and chrome hearse outfit, the firm said.

Mr Biddiss said: 'The Rocket is the purest form of bike hearse. Not a side car or trailer, it's a true vehicle in its own right.

'I wanted to create the most powerful of all coffin carriers - a vehicle that maintains the integrity of a motorcycle, appeals to the most passionate of bikers and brings a credible alternative to the traditional four-wheeled hearse or other motorcycle hearse outfits.'

Would it be appropriate to be driven "like a bat out of hell" at one's funeral? That might suggest one's eternal destination . . . which should preferably be in the opposite direction!

Labels: Automotive, Boys and their toys, Faith and life, Funny
Email ThisBlogThis!Share to TwitterShare to FacebookShare to Pinterest

The Suzuki Hayabusa hearse has set a new world record for fastest motorcycle hearse with 115.2 mph over one mile and 117.6 mph over two miles. This was achieved by the original reverend who set the first world record back in 2002. Video here http://www.youtube.com/watch?v=S-MRwKvdQqQ

This Suzuki Hayabusa hearse's world record was improved yet further in May 2013 and the video is at http://youtu.be/Jv8irsYb2I4.