Some readers may be familiar with the Q-ships of World War I. Wikipedia describes them as follows:

Q-ships, also known as Q-boats, Decoy Vessels, Special Service Ships or Mystery Ships, were heavily armed merchant ships with concealed weaponry, designed to lure submarines into making surface attacks. This gave Q-ships the chance to open fire and sink them. The basic ethos of every Q-ship was to be a wolf in sheep's clothing.

They were used by the British Royal Navy (RN) during the First World War and by both the RN and the United States Navy during the Second World War (1939-1945), as a countermeasure against German U-boats and Japanese submarines.

One of the best-known Q-ship skippers was Commander (later Vice-Admiral) Gordon Campbell. 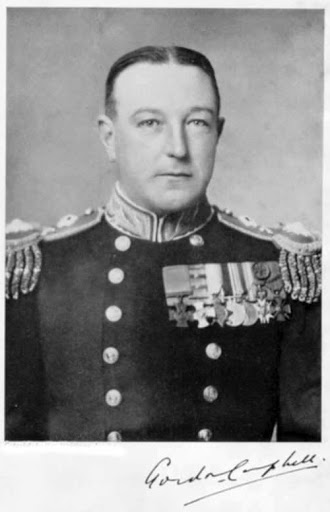 He was awarded the Victoria Cross for destroying U-83 in February 1917 with his Q-ship, HMS Farnborough, which also sank. Campbell later wrote an excellent book, 'My Mystery Ships', about the Q-ships in general and those he commanded in particular. Here's a brief extract describing his fight with U-83.

At 9.45 a.m. on the 17th we were on our easterly course " homeward bound " in about longitude 11 and a half degrees West, Latitude 51 and a half degrees north. The sea was calm, it was a nice fine day, and everything looked peaceful. Suddenly a torpedo was seen approaching from our starboard side: it was fired at a great range and we would have had time to avoid it, but (as had been prearranged) we wanted to make sure it hit. Nothing, therefore, was done till it was close to the ship and coming straight for the engine-room. At the last moment, when it would be too late for the enemy to see our movement, I put the helm over to avoid unnecessary loss of life and brought the torpedo just abaft the engine-room, which undoubtedly saved the lives of those below, but caught us on the bulkhead and flooded, in consequence, two-thirds of the ship.

Whilst the torpedo was approaching, I sang out to the Navigator, who was in the chart-house working out his morning observations, " Look out, we are going to get it all right." He only bobbed his head outside and said, " Aye, aye, sir ; just time to finish this sight," and back he went, quite disinterested except to complete his job, which was to have our position always accurate in case we wanted it.

The torpedo exploded with a great crash and knocked several of us down, including myself. Smith, who was on watch in the engine-room and nearest to the explosion, had the worst shaking, but he quickly recovered himself and went to his panic-party station in charge of a boat. After getting up, I observed a thing which I hadn't foreseen and I couldn't help laughing at. It will be remembered that we had drilled for nearly every emergency, and how I would say "Torpedo coming," and then "Torpedo hit " or "Torpedo missed." Now the torpedo had hit and I saw the men rushing for the boats, but on looking over the front of the bridge I saw a group of men still smoking and lolling over the ship's side when they ought to have been " panicking." I shouted out to know why the something something they weren't rushing for the boats. The reply was, " Waiting for the order, sir, 'Torpedo hit.'" They then joined in the pandemonium, and whilst the panic party were getting away in the boats, the submarine was seen watching us through his periscope about 2oo yards off the ship. This will show the necessity of even the "panic" being done in correct detail, and sure enough it was. The boats were lowered in a fashion enough to give any Commander seven fits, and the crew got in anyhow ; one boat was only partially lowered and then allowed to "jam," so that a rush was made for the next one, but two lifeboats and a dinghy eventually shoved off with "all" the crew, Lieutenant Hereford with my M.0.B.C. hat getting down last. An unrehearsed incident added to the panic, and this was through my friend the Chief Steward (who was a very fat man) getting pushed over the side with the crowd ; his weight was too much for his arms to support from the rope and he landed with a great thud in the boat, squashing two or three men who were already in.

Whilst this pantomime was going on, things were happening on board. The ship had only two bulkheads and the torpedo had burst the after one, so that she was free to the water from the fore side of the boiler-room right to the stern, and she rapidly began to settle by the stern-so rapidly that our black cat, which had either been blown off the forecastle by the explosion or had jumped over in fright, swam down the ship's side and inboard over the stern.

The Chief Engineer reported that the engine-room was flooded, and I ordered him and his men to hide, which they did by crawling on the top gratings : the ship being abandoned, they couldn't come out on deck-again an unrehearsed incident, but Loveless and all of them knew the game we were out to play.

As soon as the boats were away, the submarine went close to them only a few yards off ; she was obviously going to leave nothing to chance, and it was as well that the crew were carefully dressed to their part with no service flannels. One of the crew in the boats was heard telling another, as the periscope was looking at them "Don't talk so loud; he'll hear you!"

The submarine now came and inspected the ship at very close range, some 10 or 15 yards - so close that from my look-out at the starboard end of the bridge I could see the whole of his hull under water. The temptation to open fire on the periscope was very great, though obviously not the thing to do, as it would have done no harm. But it looked at the time as if, after getting deliberately torpedoed, we were going to have nothing to show for it since he appeared to be moving off.

The Chief had reported the ship sinking by the stern; still, there was nothing for it but to wait and watch the submarine move slowly past the ship and away ahead. All this time the men on board were lying hidden, feeling the ship getting deeper by the stern-in fact, the men at the after-gun were practically awash-but they all stuck it and never moved a muscle. Each one had a responsibility. Had one man got in a real panic and showed himself, the game would have been up ; the scrutiny of the submarine was indeed a severe one. The wireless operator, locked up in his cabin by himself, had to sit still and do nothing ; he must have been aching to send out an S.O.S. and have his picture in the illustrated papers next day as " the man who sent out the S.O.S.," but he knew we wanted no one to interfere with our cold-blooded encounter with the enemy.

After the submarine had passed up the starboard side, he crossed our bow and went over towards port; the signalman and I, therefore, did our " belly crawl " and swopped places. At 10.5 a.m. the enemy broke surface about 300 yards on our port bow, but not in the bearing of any of the guns. Anyhow, things were looking more hopeful and I was able to tell the men that all was going well.

The boats had by this time got to our port quarter, and towards them the submarine now proceeded. We heard afterwards that their intention had been to take the "Master" prisoner and also get some provisions. It was only a matter of waiting now, as the submarine was right up with conning tower open. It was obvious that she would pass very close to the ship, and we might just as well have all guns bearing, so as to make sure of it. As she came abreast of the ship the Captain was seen coming out of the conning tower. At this moment I gave the order to open fire - at 10.10 - twenty-five minutes after we had been torpedoed. The White Ensign fluttered at the masthead, and three 12-pounders, a 6-pounder, the Maxim guns and rifles all opened fire together. What a shock it must have been for the Captain suddenly to see our wheel-house collapse, our sides to fall down, and the hen-coop to splutter forth Maxim shots! But he had not long to think, as the first shot, which was from the 6-pounder, hit him, and I believe the first intimation the submarine crew had that anything was wrong was seeing their Captain drop through the conning tower.

The range was only about I00 yards, so the submarine never had a chance of escape. It seemed almost brutal to fire at such close range, but we had taken a sporting chance ourselves in decoying him to such an ideal position that one really had no other thought than destruction.

The submarine never seemed to recover from her surprise as she lay on the surface upon our beam, whilst we pumped lead and steel into her. Forty-five shells were fired in all, practically every one being a hit, so that she finally sank with the conning tower shattered and open, the crew pouring out as hard as they could. About eight men were seen in the water, which was bitterly cold and thick with oil. I ordered the boats to their assistance, and they were just in time to rescue one officer and one man -as the panic party called them, a " sample of each." Thus ended U.83.

The whole book is available online. Highly recommended reading for all those interested in naval warfare and military history.

Thank you. What a fabulous tale, and talk about nerves of steel. I'm going to download the book.
Have you ever read Graf Spee, The Life and Death of a Raider, by Dudley Pope? A pre-Bismarck WWII tale.

Amazon has copies of this book for a very reasonable price. I'll want to read this again, and not tethered to a computer, so I bought it. Great find, Peter. Thanks!