Banking: the old is new again - and popular!


I was surprised - and amused - to see that an old-fashioned method of banking is making a comeback in England.  The Telegraph reports:

Yorkshire Building Society's 'back to the future' passbook account has become it's most popular savings offering since its launch twelve months ago, despite offering no internet access and requiring people to bank in their local branches.

Almost three times as many people are opening these accounts, which pay 2.25pc, than any other Yorkshire Account, the mutual said, proving that the old-fashioned passbook is still popular in today's world.

Research by Yorkshire Building Society found more than three in five customers preferred the traditional branch network as their main method of managing their savings, most frequently citing customer service and convenience as the reasons for this choice.

More than half the Yorkshire's customers preferred to use a passbook to keep track of transactions on their account and almost 70pc of those surveyed favoured a branch-based account with a competitive variable rate.

The passbook has a long and noble history. They appeared in the 18th century, putting financial information into the customers' hands for the first time. Before that, all banking transactions were recorded only by the bank itself, so that customers had no history of their own deposits and withdrawals. 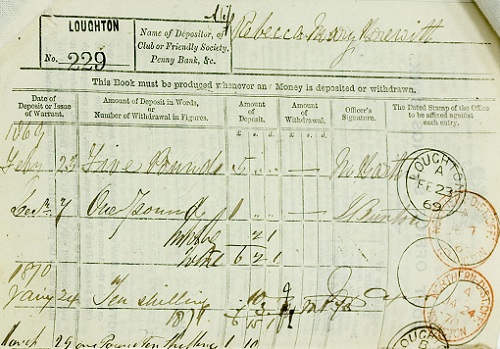 
Previously, customers' transactions were only kept in huge leather-bound ledgers at the bank, where they would occasionally be allowed to see what was recorded under their name and would be required to sign it. The passbook, which was around the size of a passport, ensured that customers had control over their own information, and was called a "passbook" because it regularly passed between the bank and the account holder for updating.

I began banking with a passbook (or simply a 'bank book', as we called them in South Africa) several decades ago, and continued to use one well into the 1980's.  It's something of a shock to realize that those born after about 1980 have probably never used one - in fact, they may never even have seen one!  It amuses me to see them making a comeback.

(Of course, a passbook account has one very significant security advantage - one can't make withdrawals or transfers electronically.  That means no-one can gain access to an Internet banking facility and empty your account illegally.  In today's world, that's no mean advantage!)

Yep, never seen one. :) In person, that is; I've seen pictures. I don't think they'll make a comeback at my bank, which only has one office and no branches. It's almost entirely internet based.

I started that way too,and my bank still offers them-but I suspect the demographic of users is...um..."of advanced years".

Back in the day, tellers actually wrote stuff in my passbook-by hand-in ink.

Now, they're updated by slipping it into a machine for imprinting. Which is a good thing, because today's tellers have limited penmanship skills.

You can probably tell how much Errornet Banking I do :-)

I thought I saw it paid 2.25%. I'd open one in a heartbeat. That is a higher rate than longer term CD's right now.

Even if it just paid only a little higher interest rate, that would be an ideal spot for my rainy day fund.