The end of a military-industrial era


From England comes the news of the closure of the final factory in the former Armstrong Whitworth manufacturing and munitions empire, established in the mid-19th century.  It had several links to very important international events, including the American Civil War.  The Telegraph reports:

For more than 100 years the factories perched on a narrow strip of land between Scotswood Road and the river at Elswick helped arm the world, made Tyneside a powerful engineering workshop and gave William Armstrong (1810-1900) a unique place among the generation of industrialists and philanthropists who made Britain the workshop of the world.

The first Lord Armstrong developed a business that was arguably the world’s first global defence company. He left the law to build cranes, branched into bridge building then moved into armaments.

The Armstrong half that became Vickers Armstrong produced the world’s first breech-loading gun for the war in Crimea, armed both sides in the US civil war, gave Japan the cruisers that defeated the Russian navy in 1905 and made huge contributions to the British effort in both World Wars. 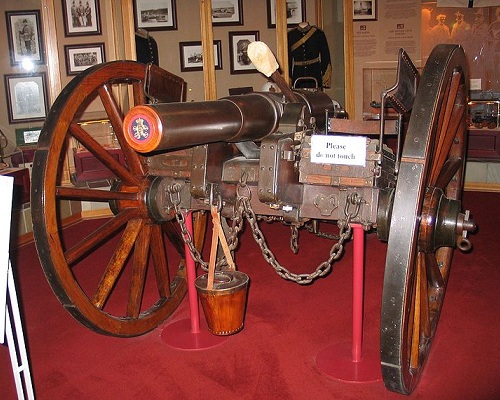 
The Armstrong business era stretched from 1847 until his death in 1900 but the Elswick and Scotswood factories continued to produce weapons of war until 1982 and what was “Armstrong’s works”, celebrated in Blaydon Races, the Geordies’ national anthem, was left as the country’s biggest and last remaining maker of armoured vehicles.

As a man, Armstrong typified the Victorian entrepreneur with a mixture of commitment, endeavour and enterprise. However, there was nothing charismatic about the young Armstrong, son of a corn merchant who became mayor of Newcastle and wanted his offspring to be content with a legal career. Instead there was an engineer and scientific curiosity hidden behind the reserved facade of a man who was refused insurance as a child because he was regarded as too frail.

Watching a waterwheel led him to design a water-powered rotary engine and then a piston version when his initial technology failed to excite.

Then it was on to the hydraulic crane, the end of his legal career and buying 5.5 acres of land at Elswick to start W.G. Armstrong & Company and build an average of 100 cranes a year until his death. Armaments were added to the portfolio in 1854 after the inquisitive Armstrong, hearing about the plight of British soldiers dragging heavy field guns around the Crimea, invented the breech-loading gun.

The design set him on his way to become the “great gun-maker” in George Bernard Shaw’s Major Barbara. He surrendered the patent to the Government in return for a knighthood, added naval guns and warships to the portfolio and had royalty beating a path to his door. Visitors to his Cragside estate included the Shah of Persia, the King of Siam, the Prince and Princess of Wales and the prime minister of China. 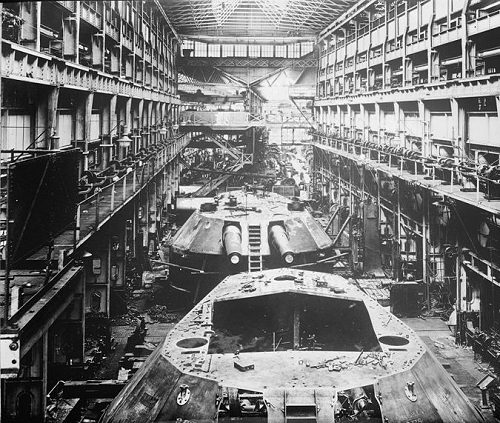 Turrets and 12-inch Mark IX cannon for the battleship HMS Cornwallis
under construction in the gun shop at Armstrong's works, 1902-03
(image courtesy of Wikipedia)

Armstrong was never a dominating personality but a shrewd judge of people. He assembled a team of skilled engineers from the boardroom to the shop floor. Andrew Noble and George Rendel, the designer of the cruiser, were among the best in a workforce who benefited from Armstrong’s largesse in providing schools and leisure facilities but harboured resentment when he led the opposition to cutting engineers’ working week.

He faced criticism for supplying both sides in the American civil war but had Ulysses S Grant, wartime leader and president, visit during a world tour.

The name of Lord Armstrong was one to conjure with in the 19th and early 20th centuries, along with those of Krupp, Maxim, Nobel and other magnates of munitions.  The closing of the last factory associated with him will doubtless be of interest to many military historians.