A tip o' the hat to reader D. M. for forwarding the link to this article.  The 'NOW Lebanon' blog reports: 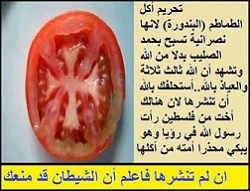 A Salafist group called the Popular Egyptian Islamic Association has come under fire after sending out a warning on Facebook urging its followers not to eat tomatoes because the vegetable (or fruit) is a Christian food.

The group posted a photo on its page of a tomato - which appears to reveal the shape of a cross after being cut in half – along with the message: “Eating tomatoes is forbidden because they are Christian. [The tomato] praises the cross instead of Allah and says that Allah is three (a reference to the Trinity).

[God help us]. I implore you to spread this photo because there is a sister from Palestine who saw the prophet of Allah [Mohammad] in a vision and he was crying, warning his nation against eating them [tomatoes]. If you don’t spread this [message], know that it is the devil who stopped you.”

Next up:  warnings from Hindu fundamentalists that Hindus should not eat beefsteak tomatoes for fear of offending sacred cows!

13th-century superstitious malarkey as they embarrass themselves yet again.

I'm beginning to think there are certain Islamic groups that are just out for the laughs.

All food is Christian. Starve for Allah today!

Heh. as many middle-eastern dishes that use cucumber, cut one across and check the seed pattern... ..STARVE, you stupid mideavelist fukkers! Don't abuse your wimmens, they could hide an AK under them burkas!! (or an RPG... jest sayin'). JohninMd(help!!!)

Now I'm hungry for a BLT.