Sailing to the stars?


The late Robert L. Forward was a well-known physicist and an interesting and quirky author.  Among many space-travel concepts he helped to develop was that of a solar- or beam-powered light sail to propel interstellar spacecraft.

It looks as if his idea may have wings, so to speak.  Flight Global reports:

Ten years after his death, Forward's idea is a top contender of potential designs being considered by the Dorothy Jemison Foundation for Excellence, a non-profit organisation that in May received $500,000 of seed money from the Defence Advanced Research Projects Agency (Darpa) to form "100 Year Starship", a project to "ensure that the capabilities for human interstellar flight exist as soon as possible, and definitely within the next 100 years".

... a chemical propulsion rocket that could boost a spacecraft to 1/10th the speed of light, or 3 million meters per second, for a fly-by mission to our nearest stars in the Alpha Centauri system would need "more fuel than there exists mass in the known universe" in terms of the needed delta-V. Flying at 1/10 the speed of light allows a round trip in one lifetime, or more than 80 years.

Interstellar advocates are looking into several alternatives, including sails.

In 1984, Forward had proposed such a system requiring no on-board propulsion as a "fly-by" mission to Alpha Centauri. The 1t spacecraft was made up of a 0.33t sail, a 0.33t structure and 0.33t payload that would consist of sensors, communications systems and other devices. The aluminium sail was to have a diameter of 3.6km, which, when propelled by a 65Gigawatt laser beam directed through a 1,000km diameter spider web-like Fresnel lens (about the size of Texas) in space, would allow for a maximum speed of 0.12c (where "c" is the speed of light) and a 50-year one-way transit time to the stars. "A laser beam going through this Fresnel lens will not diverge for 44 light years," Forward had said. "That is why you've got to think big."

For a rendezvous mission to Alpha Centauri (where the spacecraft must stop in the vicinity), Forward had proposed designing a magnetic sail (mag sail) built around the main light sail to decelerate the vehicle as it interacts with the solar plasma being pushed out in front of the destination star. To return a capsule to Earth, he suggested a detachable module at the hub of the spacecraft, which would have its own independent light sail and mag sail to capture light bouncing off the main vehicle's sail from the Earth-bound laser once the two separated.

In the late 1990s, [Geoffrey] Landis refined Forward's design for a fly-by mission, finding that by using dielectric material for the sail instead of aluminium, he could cut the power requirement by a factor of 145, or from 65GW to 448MW. He notes that 448MW is "about half the power output of a standard nuclear power plant", compared with 65GW, which would have to be generated by "nearly a hundred dedicated electrical powerplants".

While there are no missions planned to test a beam-powered sail, NASA and others are taking some baby steps in the learning process.

The Japanese space agency in May 2010 launched its Ikaros (Interplanetary Kite-craft Accelerated by Radiation Of the Sun) satellite, along with the Venus Climate Orbiter. As well as getting its propulsion from the sun via a 200m2 sail, the first satellite to do so, the Ikaros also incorporated an attitude-control system for the square solar sail and solar cells in the sail for onboard power. 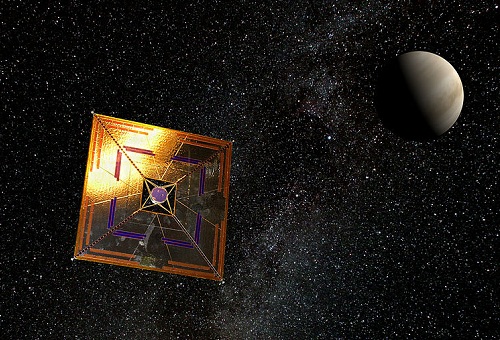 
The craft reached Venus six months after launch, coming within 80,000km of the planet during the fly-by. Japan had discussed a follow-on mission with a larger solar sail to travel to Jupiter and beyond later this decade.

In November 2010, NASA tested NanoSat-D2 with a 10m2 solar sail in a circular low-Earth orbit in a mission that lasted 240 days.

"The next thing would be to demonstrate that you can push one of these sails with a laser or microwave beam to accelerate it higher than you can get with sunlight alone," says Landis. "Some of that you can do in small scale, but eventually you'd want to push the sail with a beam as part of a mission."

As for sending humans to the stars, Landis thinks the 100-year window suggested by the Darpa project could be realisable, but says the mission would likely be a "colonisation" mission on the first try, thanks to the time involved in the journey.

"The laws of physics don't forbid it," he says of interstellar travel. "We don't have the technology yet, but there's no reason why we can't develop it."


There's more at the link, including an intriguing picture of Icarus Interstellar's 'Project Forward' concept.  Yes, they really are working on this project - it's not just a pipe-dream!

Quote: The craft reached Venus six months after launch, coming within 80,000km of the planet during the fly-by. Japan had discussed a follow-on mission with a larger solar sail to travel to Jupiter and beyond later this decade.

Solar wind is not the same as terrestrial wind. How were they able to "sail" CLOSER to the Sun?

Arthur C. Clarke wrote a terrific juvenile story about a yacht race on the solar wind; I read it in Boys Life more years ago than I care to tell. Here's a link to Sunjammer.

Don't think of it as moving against the solar wind, but falling towards the sun, and using the solar pressure to control the descent towards the sun. It's kind of like para-sailing or hot air balloons. The craft is in orbit around the sun, not linear travel.

In fact, the concept of solar sailing isn't much different than chemical propulsion rockets in that: 1) all objects we send up are orbiting the sun, just like the Earth, 2) the speeds obtained are relatively slow (by comparison to other objects in space) and 3) the use of gravity to "slingshot" a craft is an economic necessity (in terms of fuel and physical limitations) to gain speed and alter course.

When we send a craft to Mars, for example, we don't send it in a straight line from Earth to Mars. Instead, we escape the Earth's pull, achieving orbit around Earth (even though it is an ever expanding orbit, it is still "in orbit"). At that point, the craft is in orbit around the sun, and has left the gravitational influence of the Earth. All that is needed to change the orbit is attitude control adjustments, and speed. More speed equals going higher (getting farther away) from the sun, and less speed means going down (closer to the sun).

To get to Mars, we would increase the speed, expanding the orbit of our craft from the sun, and meet the planet Mars on its orbital plane. Done correctly, our craft should meet Mars and fall under its gravitational influence, and with attitude control, be brought into orbit around Mars.

Believe it or not, wikipedia has a great webpage on this--
http://en.wikipedia.org/wiki/Interplanetary_spaceflight