I mentioned the danger posed by derivatives to the world financial system in an article a couple of weeks ago.  I've since had a few e-mails from people asking how the problem affects the USA specifically, and the extent of our banks' exposure to this problem.  The answer is, they're at grave risk from it - perhaps so grave that no recovery is possible, absent a miracle.

The nine largest banks' exposure totals almost $229 trillion.  Here's a graphic representation of the size of the problem, courtesy of Demonocracy.  Each of the towers at either side of the image represents a stack of $100 bills totaling $1 trillion. 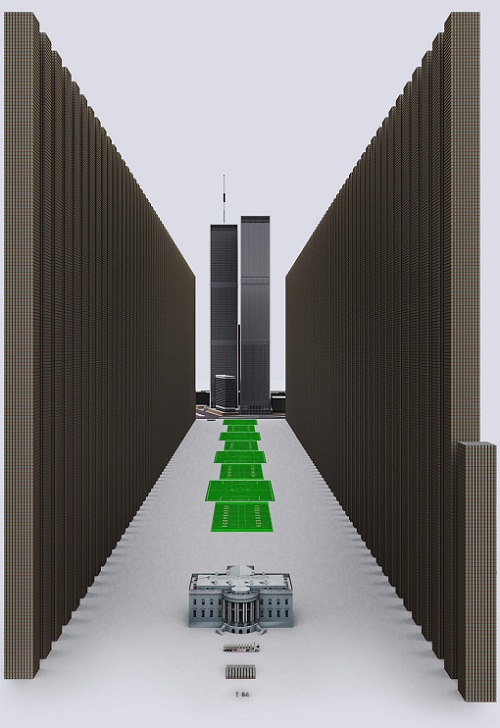 Note the little man standing in front of the white house. The little worm next to the last football field is a truck with $2 billion dollars. There is no government in the world that has this kind of money. This is roughly 3 times the entire world economy.


There's much more at the link.  I highly recommend scrolling through Demonocracy's graphic portrayal of the derivative crisis.  Further information may be found in two articles at the Economic Collapse Blog, which are also worth careful study.

My perspective: I think what makes this so appalling is that our dire situation was created by conservatives and liberals alike, exacerbated by an administration that has received the benefits of derivatives, knows the pitfalls, and has not suggested needed reforms, because their long-term goals needed a weakened economy to succeed.