Who will lift the lifters?


I was highly amused by this photograph of cranes lifting each other in series. 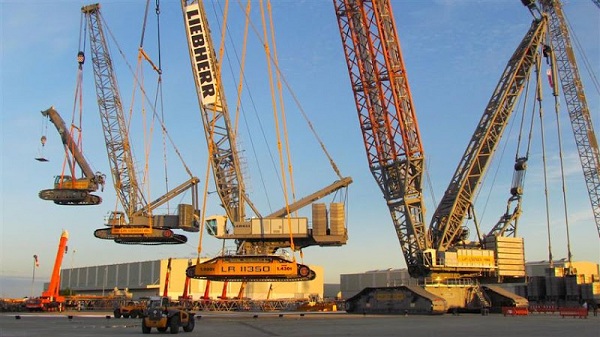 The stunt was arranged at a Liebherr open day in Ehingen, Germany.

The highlight of the machine demonstrations was the LR 13000 lifting the three smaller cranes. This particularly tricky lift was the brain-child of Hans-Dieter Willim, Liebherr’s chief crane designer.

The centres of gravity and weights of all the cranes had to be calculated very accurately as any deviation would immediately have affected the working radius of the crane lifting triggering a chain reaction.

The LR13000 was then able to slew the load smoothly as both the counterweight and three crane load were in balance. To end the demonstration, the LR 13000 then tracked – very slowly - with its 5,000 tonne applying a ground pressure of only 70 tonnes per square metre. Additional mats could be used to reduce this to 30 tonnes a square metre.


There's more at the link, including more photographs and technical details.

Labels: Boys and their toys, Congratulations, Technology
Email ThisBlogThis!Share to TwitterShare to FacebookShare to Pinterest

It reminds me of the generators being hung from the cranes around here so they don't get stolen.