Today's award goes to the telecommunications maintenance department of the city of Guilin in China.  The Austrian Times reports:

Red faced telecom officials in southern China have apologised after bungling workers sent to repair a snapped concrete phone line pole put it back together with sticky tape. 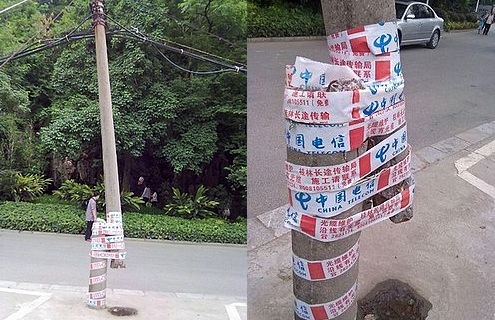 The pole - in Guilin city - had been broken in two when a truck reversed into it and was supposed to have been replaced.

Instead, repairmen bound it with steel cable and then covered the lot in sticky gaffer-style tape.

"We can only apologise," said a spokesman for China Telecom.

"It should have been replaced and will be as soon as possible," they added.


The funny thing is, it must have taken much more (and harder) work to fish the ends of the pole together like that than it would have done to replace it!

Hoo boy... If THAT is in public view, waht's being the scenes???

They may not have had a replacement pole available at the time. As a kludge, it worked. I give 'em points for that.

I was thinking what Anon 1217 said: it looks like a temporary fix until they get a pole. At least I'd hope.

No pole so they kept if from falling (the tension on the power lines supports it to some degree) and then wrapped it with plastic to keep passing folks from getting cut on the wire.

Think back to your military days when "an order was an order!" If they had no capability to rewire, or if there were politicians in the area who didn't want the bother of an outage, I give them major "attaboy" points for fast action (clearly, it worked) but also the perennial "OS" when they were caught.

Looks like a "good enough" temporary fix.
I have been in a position where because we could not get a replacement pole for several days. We wired insulators to a tree that we trimmed the branches off, then hooked the high voltage lines to the insulator then energized the lines. It worked until we were able to replace the broken pole.