You're only a wallet to them, not a person


I was angry - but not surprised - to read about what I regard as a greedy, self-serving and dehumanizing business practice.  The Wall Street Journal reports:

Orbitz ... has found that people who use Apple Inc.'s Mac computers spend as much as 30% more a night on hotels, so the online travel agency is starting to show them different, and sometimes costlier, travel options than Windows visitors see.

The Orbitz effort, which is in its early stages, demonstrates how tracking people's online activities can use even seemingly innocuous information — in this case, the fact that customers are visiting Orbitz.com from a Mac—to start predicting their tastes and spending habits.

Orbitz found Mac users on average spend $20 to $30 more a night on hotels than their PC counterparts, a significant margin given the site's average nightly hotel booking is around $100, chief scientist Wai Gen Yee said. Mac users are 40% more likely to book a four- or five-star hotel than PC users, Mr. Yee said, and when Mac and PC users book the same hotel, Mac users tend to stay in more expensive rooms.

"We had the intuition, and we were able to confirm it based on the data," Orbitz Chief Technology Officer Roger Liew said.

The effort underscores how retailers are becoming bigger users of so-called predictive analytics, crunching reams of data to guess the future shopping habits of customers. The goal is to tailor offerings to people believed to have the highest "lifetime value" to the retailer.


There's more at the link, including more specific demographic information that distinguishes Mac from PC users.

It's easy enough to find out what operating system visitors to a Web site are running on their computers.  This is what my most recent visitors used: 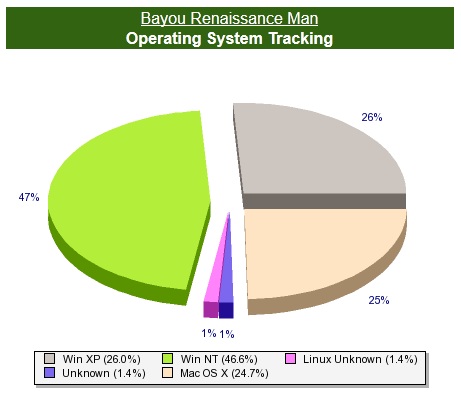 (The 'Win NT' label refers to Windows Vista and Windows 7 users - both of those operating systems utilize the NT kernel.)

My biggest complaint about such methods is that they appear (to my eyes, at least) to completely dehumanize our contact with corporations.  We're no longer 'Peter' or 'Mary' - we're an operating system, or a credit card number, or a purchaser of object X who might therefore be a suitable target market for object Y.  For heaven's sake, what happened to treating people like human beings?  For that matter, isn't it basic honesty to show the same choices to all inquirers, and let users sort them into ascending or descending sequence of cost, etc., rather than try to deliberately manipulate them into buying a more expensive option without showing them the others?  To my mind, and according to my code of ethics, this particular business practice certainly qualifies as dishonest.

Gotta agree... Did that from home last night, same IP address, same location for hotels, only difference one search from a Win7 machine, one from a MAC. $22 higher from the MAC, and yes I went back and re-ran the search from the Win7 machine and came up with the same lower rate... sigh

I know I'm adding to your Linux count :).

You could reasonably argue that it is treating you more like a person and less like "Customer #1509832". One of the great things that happens when you become a frequent and regular customer of a local store is that the owner/employees get to know you and your tastes, and when you come in, they don't waste your time trying to sell you something you don't want or need.

When I was in college, I was a regular at a local food place for lunches, and it got to the point where when I would show up in line, the folks would start prepping my usual order so that it was done by the time I got to the register.

I see this as something of the same thing. If they know that on average their customers who visit using a mac don't bother going for 1 and 2 star places, why show them those places by default? It's my understanding that they're just showing different locations, not charging different rates for the same room.

I disagree, completely! This is blatant cost discrimination: "Oh, this guy usually pays more, so we can get away with charging him more for the same product!" Why on Earth would any customer agree to be charged more money for the same product based on their OS?

Now that this price differentiation has become public, I predict that Orbitz will see a great decline in the number of Mac OS users who utilize their services.

Also, doesn't this mean that they are conducting a False Advertising scheme? They claim to have the lowest prices, but don't tell you that you can only get them if you log in from a PC.

I disagree, completely! This is blatant cost discrimination: "Oh, this guy usually pays more, so we can get away with charging him more for the same product!" Why on Earth would any customer agree to be charged more money for the same product based on their OS?

Um, because he isn't?

From the fine article:
Orbitz executives confirmed that the company is experimenting with showing different hotel offers to Mac and PC visitors, but said the company isn't showing the same room to different users at different prices.

Emphasis mine. This is a company tailoring its search results to meet the expectations of its users, not a company charging different prices for the same product. Or, as tpmoney already said, "when you become a frequent and regular customer of a local store is that the owner/employees get to know you and your tastes." In this case, your tastes are being inferred from demographics instead of direct observation, but the principle is the same.

Also, doesn't this mean that they are conducting a False Advertising scheme? They claim to have the lowest prices, but don't tell you that you can only get them if you log in from a PC.
Again, no. Go read the article and get the facts.

I am with tpmoney I don't see what the fuss is about. This about knowing your taste and making offers accordingly.You are not prohibited from looking at lower star and lower priced accommodations its just that the higher the higher rated higher priced places are given priority.

I'm not really seeing this as problematic either. It's not like they won't show the Mac users the cheaper hotels, they're just defaulting to showing them the ones that they are statistically more likely to want anyway. It's efficient to show people the thing they're most likely to buy, first. It saves both the seller and the customer time.

In this case, the seller doesn't lose anything no matter how long the customer takes to make a selection, so the customer is really the one with the most to gain not having to page through all the stuff they are less likely to care to look at anyway.

I don't see it as much different than Amazon and "People who bought what you just bought also liked the following:"