Where did all that debt come from?, Part 1


Yesterday I posted an article titled 'The dominoes are falling thick and fast now'.  In it, I examined the latest economic news from Europe and provided two 'worst-case' scenarios of how the current crisis might end up in a few months' time.

I still basically don't understand any of this at all. How can there even be that much debt? And as long as the businesses involved are still making product and providing service, how are they unable to maintain the status quo?

Or is the problem mostly due to many of these very rich people having most of their wealth actually just be virtual, theoretical wealth tied up in investments that have a supposed value that doesn't match reality, and they're going to be pissed when it turns out that they made bad investments?

I dunno. I just can't wrap my head around it. People want stuff, the companies that make stuff want to sell it... it just seems like the pressure to trade should keep things moving. Maybe this is chauvinism borne of a life spent entirely in the United States, where the money system has been, if not rock steady, at least pretty close to unassailable, at least in my lifetime.


Perlhaqr, those are good questions, but they can't be answered without going into a lot of detail;  and I'm not sure how many readers have a broad knowledge of financial matters, so it's hard to judge just how much detail is necessary.  I'm going to assume a worst-case scenario, where everything needs explaining, from the basics on upward.  Furthermore, it won't be possible in a blog article to cover everything in depth.  I'll necessarily have to over-simplify some things.

I'm going to respond in three parts.  Tonight I want to address the question of leverage, and what it implies for a system relying on debt.  Tomorrow night I'll address the banking system, and where it obtains funds for and how it extends credit to meet the demand for debt financing.  Finally, on Friday evening, I'll address the derivatives market, which takes both leverage and credit to absurd extremes, and is the ultimate driver of our debt-induced financial crisis.

So . . . debt.  How did our society come to be awash in debt, individual and corporate and government?

It begins with an understanding of what debt is supposed to achieve.  Historically, one went into debt in order to purchase something one needed (note, not just wanted, but really needed).  To do so, one had to prove one's credit-worthiness to a bank.  One did so partly by showing, over time, that one could earn a living, pay one's monthly bills, and generally be a trustworthy manager of one's (usually small) finances.  After demonstrating one's credit-worthiness, one went to the manager of the local bank and asked for a loan to (say) finance a home, or set up a small business, or something like that.

The manager would first satisfy himself that the applicant posed minimal credit risk to the institution.  Assuming he found the applicant to be credit-worthy, he'd then decide how much equity the latter needed to invest in the transaction.  Equity refers to the share of the asset in question that will be financed out of the applicant's own funds, rather than money borrowed from other sources.  Typically, the higher one's equity in an asset, the more deeply committed one is to paying off the balance of the loan on that asset:  because if one doesn't pay it off, and the asset is repossessed by the creditor, one loses one's equity as well as the use of the asset.  If it's later sold to someone else for a sum greater than the amount owed on the loan, the creditor might release the balance of the sale price as a return on one's equity - but there's no guarantee that a bankruptcy sale would achieve a sufficiently high price to allow that.

This worked well while the risk of lending money was carried by the banks actually doing the lending.  It was their money at stake, after all - or rather, money belonging to their depositors - so they were very careful to lend it only to those who were most likely to repay it!  The interest earned on such loans was used to pay (lower) interest to depositors, the difference being profit to the bank.

However, political and economic pressures began to distort this lending process.  From the government came pressure to lend to groups who were politically favored - e.g. minorities, those living in 'disadvantaged' communities, etc.  Banks tried to avoid making such economically unsound loans by pleading the lack of credit-worthiness of such applicants and the increased credit risks involved.  Government's response was to make the credit risk more acceptable by setting up various bodies to 'insure' the banks against undue losses.  Fannie Mae and Freddie Mac are two such bodies, underwriting and supporting home ownership loans to applicants who would otherwise not be able to obtain them due to their poor or non-existent credit history.  Later, in the 1960's, government would classify the denial of loans to such individuals as a civil rights issue, rather than a financial one.  They threatened to penalize banks that 'discriminated against' such applicants.

Not surprisingly, banks caved in to such pressure, and extended loans to applicants who did not meet normal standards of credit-worthiness.  Furthermore, such applicants frequently proved unable to come up with the usual deposit of 20% of the value of the property.  Many couldn't even put up half that sum.  This led to drastically reduced equity requirements (currently only 3.5% for an FHA loan).  If a buyer put up 3.5% equity (i.e. $350) in a $10,000 property, he'd be leveraged at almost 29-to-1.

Despite - or, rather, because of - all these concessions, those who took out such loans frequently proved unable to service them, and many eventually defaulted on them.  This led to the inexorable expansion of government's role in the loan business, taking over loans in default, reimbursing banks for their losses, and then trying to dispose of the properties thus acquired.  However, the government's role as insurer of such loans attracted commercial interest.  If government could 'insure' bank loans, why couldn't this be offered as a commercial service too?  So, over time, private mortgage insurance services became commonplace.  Such companies would insure banks' mortgage loans against default, relying on their own analysis of the credit-worthiness of applicants to decide whether or not to issue such insurance.  Credit insurance rapidly became, not an option, but a requirement.  If one didn't qualify for credit insurance, one couldn't get a loan at all.  The cost of such insurance was simply added into the loan administrative costs, so that many people weren't even aware that they were paying insurance premiums as part of their monthly repayments.

The concept was soon extended further, applying to all forms of bank credit.  When credit cards became more common, card issuers either self-insured against losses or took out credit insurance with other companies.  Large 'umbrella' card issuers such as Visa or Mastercard provided such insurance services to banks that issued cards under their imprint.  Again, the costs of such insurance were built into the fees charged to merchants who accepted the cards in payment for their goods or services.  The merchants, in turn, passed on those costs to their customers in the form of higher prices.

All these developments meant that banks were no longer so tightly restricted by considerations of credit-worthiness in deciding whether or not to make a loan or extend some form of credit.  As long as they could obtain credit insurance, their risk in making the loan was greatly reduced, so they could also forgo their usual requirements for equity.  As a result, the amount of credit available to consumers exploded - and consumers took full advantage.  Consider this graph of the 'Ratio of Total Debt and Personal Savings to Disposable Personal Income (DPI), 1950-2008', issued in a working paper by Harvard Business School in 2010 (you'll find it on page 52). 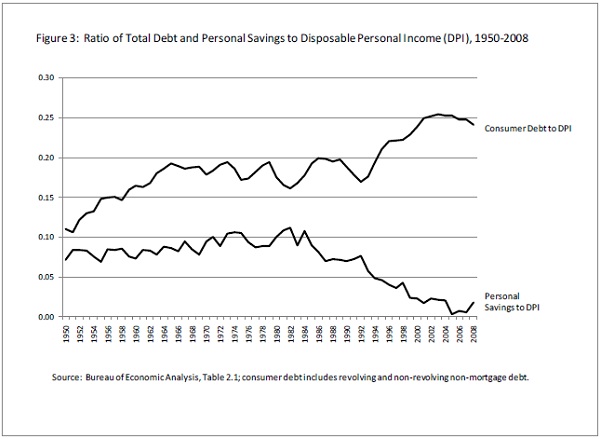 Use of credit went up;  savings went down.  That's a logical development when it's cheaper and easier to obtain credit than it is to save up for something.  The culture of 'instant gratification' became a marketer's strongest ally.  "You don't need to wait and save up for it - you can have it now!"  Furthermore, consumers became more and more leveraged.  Where they might have had to put down 20% equity to get a loan, they could now get many forms of credit (e.g. a credit card or revolving credit facility) where no equity whatsoever was required.  Their 'leverage' approached infinity!  This seemed wonderful . . . until they could no longer pay their bills.

Of course, bankers ran into a problem.  They could only lend out as much money as their depositors put into the bank.  How could they meet the growing demand for credit from consumers in the face of this restriction?  We'll discuss that tomorrow night in Part 2 of this series.

Whoa. I come by to see if there's been a response to my comment and, well, I get a whole series of posts! :)