A respectful salute to a warrior


The saying goes, "There are old soldiers, and there are bold soldiers, but there are no old, bold soldiers".  (The same saying may be found in countless other fields as well, I'm sure.)  However, the Marine Corps Times appears to have found the exception that proves the rule.

Col. Wayne R. Steele despises the term “lifer”. He’s a “professional Marine”, thank you very much. Yet after 41 years (and counting), Steele, 61, has spent the better part of his time on earth serving in the Marine Corps, obtaining an astounding 17 ranks along the way, pulling duty at darn-near every base or air station in the service, and deploying in support of multiple operations dating back to the 1970s. 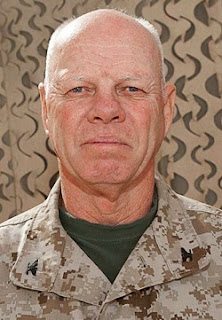 Today, fittingly, Steele is in Afghanistan, where he is the senior logistician and G-4 for 3rd Marine Aircraft Wing (Forward). It will be his last assignment. He’s closing in on 30 years as an officer, and recently received a letter from Marine Corps headquarters stating it’s time for him to retire. That is scheduled to happen in October, when 3rd MAW comes home from combat.

Few Marines make it this far — for this long and in such a curious manner. He went from private to gunnery sergeant, warrant officer to chief warrant officer 5, and lieutenant to colonel. His career overlapped with several changes that eventually reshaped the Corps’ restricted officer community. Today, limited duty lieutenants and captains don’t also hold CWO ranks, as Steele did in the 1980s.

Over the years, Steele led platoons and commanded units. And he loved being a drill instructor and guiding Marines as a gunnery sergeant.

“My greatest pleasure is leading Marines, being able to mold young men and women as good citizens,” he said.

He loved going to sea on ships, something he wishes more Marines could experience like his adventurous cruises to the Mediterranean and Caribbean.

And as a warrant officer, Steele fulfilled a dream of leading Marines as a commander. Over the years, he’s learned that “yelling and screaming” isn’t always the best way to get someone’s attention. Now he reads Marines’ body language, he said. “They can tell you a whole lot without saying a word.”

And while he’s gotten older (he’ll turn 62 in September), Steele is fit and squared away, nearly acing his last Physical Fitness Test. And last year, during the casualty-carry portion of the Combat Fitness Test, the colonel out legged a corporal, probably just 22 or 23 years old, who looked at Steele in utter surprise as the colonel scooted by.

“Hopefully that motivated him,” Steele said. “I know he tried to beat me.”

There's more at the link.  Bold print is my emphasis.

With a track record like that, what can one do except salute with great respect to acknowledge a life well lived?  Congratulations, Col. Steele.  I hope your retirement will be as fulfilling and enjoyable as your career.

We are fortunate that he stayed so long. Thank you, Sir.

Thank you Colonel, our Corps is better due to your contribution.