Feel-good aviation news of the day


Well, actually it's a few days old, but better late than never!  The Birmingham News reports:

It was quite a fifth birthday for McKaylee Borklund. 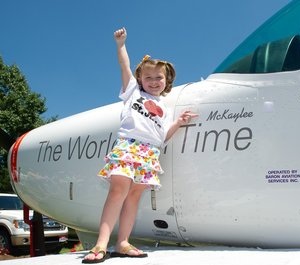 The 5-year-old from Birmingham was a special guest at the FedEx St. Jude's Classic golf tournament this week in Memphis, where a plane in the FedEx fleet was named for her.

"Wow, I'm so famous," McKaylee told her mother Jessica, after a Cessna Caravan 208 was unveiled with her name.

The daughter of Stephen and Jessica, McKaylee has been a patient of St. Jude Children's Research Hospital for most of her life, fighting a brain tumor. She received the honor after her name was drawn from about 30 names of patients at the hospital.

McKaylee was less than a year old when doctors discovered her condition. At only 7 months old, doctors found a rare, malignant brain tumor -- anaplastic astrocytoma -- in a dangerous part of her brain.

FedEx Express is the fourth-largest airline in the world in terms of fleet size.  It operates about 400 jet freighters, plus almost 50 ATR twin-turboprop aircraft and almost 250 Cessna 208B Caravan single-engine aircraft, the latter taking packages to and from small airports all over the USA.

I think it's a wonderful gesture to name a company aircraft after someone like McKaylee.  I hope it gives her something to celebrate during the bad times, and helps her to set an example for others in her position.  Way to go, FedEx Express!