Back in 2009 I reported the sad news of the death of Mahmut Agyün, inventor of the world-famous döner kebab.  I trust that, wherever he may be in the hereafter, he heard about this news from Turkey.

Hanging from a crane in the Turkish capital of Ankara, the doner kebab, made from the meat of seven cows, had to be prepared by 10 cooks, weighing in at a hefty 1,198 kilograms [2,641 pounds] and setting the new world record for the largest doner kebab, according to the World Records Academy. 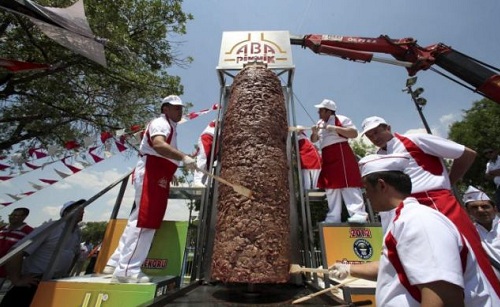 Cooks were forced to stand on special scaffolding to cut the 2.5 metre [8.2 feet] long kebab as spectators waited in line to try it in a sandwich.

The previous Guinness world record holder weighed in at only 468 kilograms [1,032 pounds].


There's more at the link.  Here's a video report about the record.