I was over at the Popular Mechanics Web site looking for a particular piece of information when my attention was caught by a robotic fish - or, rather, an article about it.

Something was killing young salmon in the dams of the Pacific Northwest. Every spring, tens of millions of them would swim through the hydroelectric dams of the Columbia River on their way to the ocean, and every year as many as 10 percent emerged bloodied or suffocated. For years, the exact cause remained elusive.

Tom Carlson, a fisheries specialist at the Pacific Northwest National Laboratory (PNNL), was so frustrated at how little was known about what happens inside the dam turbine that he invented his own solution — a robotic swimmer called the Sensor Fish. 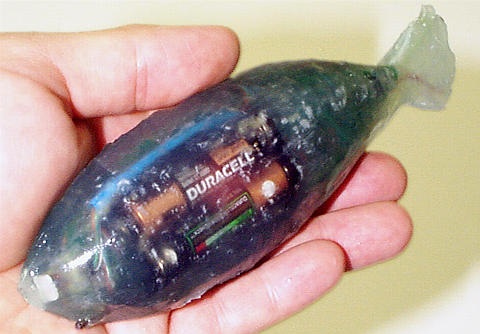 
By 2000, he’d accumulated a mountain of data about what happens to young salmon traveling down a dammed river. Information from Sensor Fish shows that as a young Chinook salmon wiggles past the turbine blades, the pressure outside its body drops abruptly, which affects the fish’s internal organs. Its internal air bladder suddenly expands, damaging organs and even forcing bubbles into its blood — similar to what happens when a diver gets the bends. Scientists are still not certain why this affects only some of the fish that swim through dams, but the fact that most dams have spillways and outfalls that some fish will travel through helps to keep the mortality rate down.

The wealth of data gathered from this surrogate salmon is informing the design of the new, fish-friendlier Alden turbine. Shaped like a corkscrew to smooth out the pressure, Alden’s model also wrings out a bit more electricity than the turbines now in use (called Kaplan turbines), Alden says, and as much as the newest designs in the lab, with peak efficiencies around 95 percent.

I wouldn't have thought that most fish could pass through hydroelectric turbine blades at the best of times!  Those things spin at up to several hundred revolutions per minute inside their penstocks, which I figured would chew up anything fish-sized passing through them.  Clearly, I was wrong.  In fact, an article about the new Alden turbine design claims it'll offer a survival rate of greater than 98% for fish less than 8" long.

The things one learns while wandering around the Internet!

I sure had no idea a turbine could be built that would give so high a fish survival rate.

Most interesting piece of the day.