An Australian TV crew has filmed a shark eating a dead giant squid.  The Telegraph reports:

The giant squid, one of the most elusive creatures of the ocean, was already dead when it was found floating off the coast of New South Wales by Al McGlashan and his crew.

A fishing columnist for Australia's Daily Telegraph, Mr McGlashan was filming for a new series of his television series Strikeforce, when he came across the "mythical" cephalopod.

"In all my time of fishing, I've never seen calamari rings so big," he told local media. "It was massive."

"It must have died not that long before we found it because it didn't smell at all and its colours were still strong - most giant squid remains are smelly and rotten and just off-white by the time someone finds them."

Soon after the discovery the carcass was soon attacked by an 8ft blue shark, an event that McGlashan and his team were able to record. 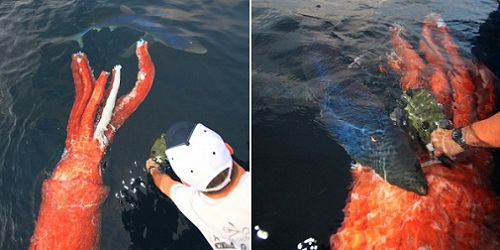 "It hoed into the squid straight away and didn't care a bit that it was right next to us; it was taking great chunks out of the squid in one bite," Mr McGlashan said.

"It goes to show not much goes to waste in the natural world. Everything gets recycled somehow."


There's more at the link.  Here's part of the video shot by the crew.


I wonder if you could make calamari out of a giant squid?  Might be a bit tough, I suppose . . .

Calamari from a giant squid, no, the 'meat' has a very strong Ammonia taste, rendering it very unpalatable.

Eating calamari is like chewing on rubber bands, that must have been one hungry shark.

1. I have caught and eaten Humboldt squid in the Sea of Cortez, Mexico. They are commonly 20-25 lbs and sometimes twice that size. The meat on the body is in the form of a cylinder and the meat is an inch or more thick. It's a bit tough but gelatinous. Tenderizing is easy. Most are not eaten as calamari rings. Instead the meat is cut into steaks, breaded, and fried. Usually the thickness has to be reduced to about 1/2".

2. The shark was going after the head which is the tenderest part.

3. Squid are cannibalistic. This one could have been killed by other squid. I notice that most of the tentacles are missing.

Little ones are okay, that big, Stuart is correct... And that shark was HUNGRY!

This blog entry made me hungry.