Archeologists in Germany have an unlikely new hero: former Chancellor Gerhard Schröder. They have nothing but praise for the cigar-smoking veteran Social Democratic politician.

Why? Because it was Schröder who, together with Russian leader Vladimir Putin, pushed through a plan to pump Russian natural gas to Western Europe. For that purpose, an embankment 440 kilometers (275 miles) long and up to 30 meters (100 feet) wide had to be created from Lubmin, a coastal resort town in northeastern Germany, to Rehden in Lower Saxony near the northwestern city of Bremen.

The result has been a veritable cornucopia of ancient discoveries. The most beautiful find was made in the Gessel district of Lower Saxony, where 117 pieces of gold were found stacked tightly together in a rotten linen cloth. The hidden treasure is about 3,300 years old. 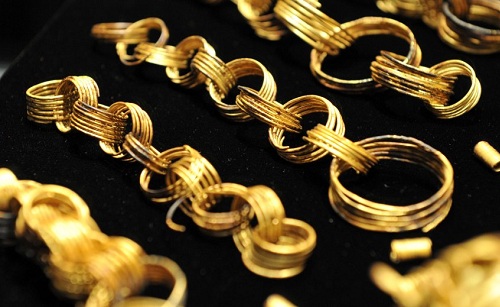 When Johanna Wanka, the Lower Saxony science minister, unveiled the treasure to the press in February, the story became even more surprising. She explained that testing done at the University of Hanover had revealed that the gold had come from a mine in Central Asia.

"Using a mass spectrometer, we examined more than 20 trace elements, allowing us to determine the fingerprint of the metal," explains chemist Robert Lehmann. "The gold vein must have been created deep in the mountains of Kazakhstan, Afghanistan or Uzbekistan over a period of millions of years."

Lower Saxony can now consider itself the owner of what Wanka calls the "find of the century." Merchants trading in luxury goods used to travel across the entire continent, says state archeologist Henning Hassmann. "Trips of 10,000 kilometers [about 6,200 miles] were nothing to them."

He suspects that the gold found in Gessel was initially brought in caravans from the mountains to the nearby Indus Valley, where a giant riparian culture flourished until about 1,800 B.C. From there, says Hassmann, the merchandise was sent by ship to Mesopotamia and, after that, somehow reached the northern flatlands.

As audacious as the Asia connection seems, it could be true. There is plenty of evidence that human greed led to globalized trade more than 3,000 years ago. The ancient Egyptians' folding-chair designs reached Sweden, and magnificent Spondylus shells from the Mediterranean have been found as far away as Bavaria.

Valuable metals such as tin, copper, gold and silver were a favorite among long-distance traders, who dragged them across the continent in rucksacks or on oxcarts. Ötzi the Iceman, a natural mummy found in the Ötztal Alps, probably traded in gold and flint, and was murdered in the process.

But did the merchants' extensive trading networks reach as far as the remote mines in Central Asia as long ago as the 2nd century B.C.? It certainly would have been worthwhile. A massive gold-and-tin belt extends from the Altai Mountains to the Aral Sea. A prehistoric gold mine, the largest in the central Caucasus region, was also recently discovered in Armenia.

This could explain the origins of the myth of the Argonauts, who in the story sail through the Black Sea to steal the Golden Fleece.


There's more at the link, plus several photographs of the loot gold.

I find it fascinating to think of that gold being grubbed from the ground at great peril to its miners (who were probably slaves or prisoners).  They had no modern mining equipment, instead working with picks and shovels - perhaps with fire to heat the rock before quenching it with water, causing it to split, revealing the vein of gold or the ore that held it.  After all the laborious effort needed to extract it the gold would have to be refined, then taken on foot or by horse or camel to where it could be traded for the necessities of life.  At every turn there would be those trying to steal it, if necessary by murdering its bearers.  Who knows how much blood was shed for and over those gold rings?

At long last, certainly years, perhaps decades, possibly even centuries after it had been mined, the gold arrived in what is today Germany.  Who brought it there?  How had it come into their hands, and how many times had it changed hands on the way to its penultimate resting-place?  Who buried it, and why?  Was he fearful of a sudden attack by a rival tribe or group?  Did he try desperately to safeguard his wealth before the enemy arrived?  Were the gold rings too dangerous to carry, attracting unwelcome attention from those less well off?  Did they take up too much space that was instead needed by children, or for food, during the flight from danger?

All speculation, of course, and we'll never know the answers . . . but fascinating nonetheless.

Morgan Lewellen's novel "The Horse Goddess" speculates about a blending of Hallstadt (Celtic) and Scythian cultures that led to the development of what we typically think of as Irish and Welsh Celtic traditions and beliefs. Trade plays a role, and it is easy to imagine how the gold might migrate. If you are familiar with the Gundestrup cauldron, from the bog in Denmark, it has what are probably Scythian or Central Asian elements in the decorations.