Another unsung hero comes to light


I'm very moved to read the story of Denis Avey.

Denis Avey is a remarkable man by any measure. A courageous and determined soldier in World War II, he was captured by the Germans and imprisoned in a camp connected to the Germans' largest concentration camp, Auschwitz.

But his actions while in the camp - which he has never spoken about until now - are truly extraordinary. When millions would have done anything to get out, Mr Avey repeatedly smuggled himself into the camp.

Now 91 and living in Derbyshire, he says he wanted to witness what was going on inside and find out the truth about the gas chambers, so he could tell others. He knows he took "a hell of a chance".

He arranged to swap for one night at a time with a Jewish inmate he had come to trust. He exchanged his uniform for the filthy, stripy garments the man had to wear. For the Auschwitz inmate it meant valuable food and rest in the British camp, while for Denis it was a chance to gather facts on the inside.

He describes Auschwitz as "hell on earth" and says he would lie awake at night listening to the ramblings and screams of prisoners.

"It was pretty ghastly at night, you got this terrible stench," he says.

He says he would ask where people he'd met previously had gone and he would be told they'd "gone up the chimney".

"It was so impersonal. Auschwitz was evil, everything about it was wrong."

He also witnessed the brutality meted out to the prisoners, saying people were shot daily. He was determined to help, especially when he met Jewish prisoner Ernst Lobethall.

Mr Lobethall told him he had a sister Susana who had escaped to England as a child, on the eve of war. Back in his own camp, Mr Avey contacted her via a coded letter to his mother.

He arranged for cigarettes, chocolate and a letter from Susana to be sent to him and smuggled them to his friend. Cigarettes were more valuable than gold in the camp and he hoped he would be able to trade them for favours to ease his plight - and he was right.

Mr Lobethall traded two packs of Players cigarettes in return for getting his shoes resoled. It helped save his life when thousands perished or were murdered on the notorious death marches out of the camps in winter in 1945.

... before he died Mr Lobethall recorded his survival story on video for the Shoah Foundation, which video the testimonies of Holocaust survivors and witnesses. In it he spoke of his friendship with a British soldier in Auschwitz who he simply called "Ginger". It was Denis.

He also recalled how the cigarettes, chocolate and a letter from his sister in England were smuggled to him in the midst of war.

"It was like being given the Rockefeller Centre," he says in the video.

There's much more at the link, including two video clips, one of an interview with Mr. Avey, the other of the reunion between Mr. Avey and Mr. Lobethall's sister, Susana, who'd sent the cigarettes and other items Mr. Avey smuggled to Mr. Lobethall in the concentration camp. The latter is quite a tear-jerker. It includes extracts from Mr. Lobethall's testimony to the Shoah Foundation. An audio interview with Mr. Avey is available at this link: it's a BBC program, with Mr. Avey's segment starting at 17 minutes and running for about 7 minutes. (The program will only be available for a few days, so if you want to listen to it, do so quickly!)

I did an Internet search, and found Mr. Avey's name mentioned in several accounts of prisoner-of-war activities, including his role in obtaining compensation for British POW's forced to work in Nazi concentration camp factories. That, plus the Lobethall video recording in the Shoah Foundation archives, persuades me that his story is correct in all essentials. Certainly, the prisoner-of-war camp at Monowitz, also known as Auschwitz III, is well documented (2 links), as is his presence there. 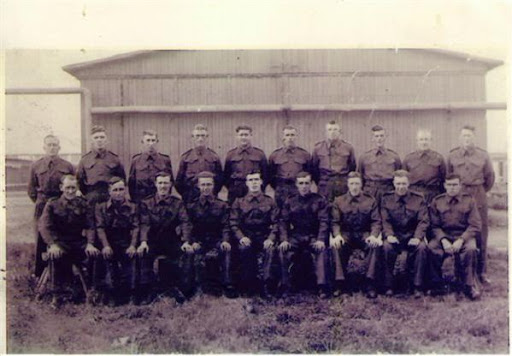 I can only take my hat off to Mr. Avey, and thank him for his courage in conditions of almost incredible hardship and danger. A hero indeed!