Two Cambridge mates say they may turn their unusual method of trimming hedges into a business, after they suspended a ride-on mower from a crane to do the job.

"This is how the Waikato boys mow a hedge," the ride-on mower operator told the Waikato Times.

The operator, who did not want to be named, is now nursing a broken hand, but said it wasn't a fall from the mower that caused the injury but one off the crane.

He admitted it was not the safest method of trimming the hedge, but said it was all done as a bit of a joke. 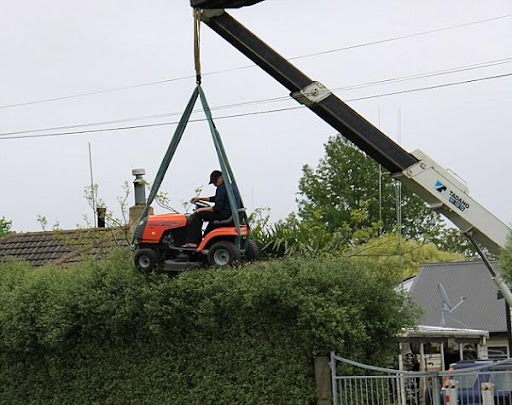 The man had expected a real hedge trimmer to turn up on Sunday to mow the hedge, but when he didn't his mate arrived with his crane and a ride-on mower.

The next thing he knew he was being hoisted up on top of the two-metre high hedge.

"We were supposed to get all dressed up in our Mooloo gear and show people that this is how the Waikato boys mow their hedges."

The unusual sight bemused passing motorists. One passer-by, Bart Dinger, said it was a classic case of Kiwi ingenuity.

"A kiwi classic – jandals and all," he said.

The mower operator's wife burst out laughing when she drove home to see her husband on the hedge.

"I saw the crane first and thought 'great, the hedge is getting trimmed', but I didn't realise this was what they were planning," she said.

Her husband spent about 20 minutes mowing the hedge which had "got out of hand over winter".

"The mower was doing an all-right job, but I reckon it would work better on a hedge that's not so spiky." He said there was nothing in the instructions to say the mower couldn't be used on hedges and joked that they should go into the contracting business.

I thought I'd seen just about every safety violation in the book . . . but somehow, someone always manages to come up with something I'd never have dreamed of! I'd say that broken hand was thoroughly deserved!

Labels: Boys and their toys, Danger, Doofus, Funny, The Mind Boggles
Email ThisBlogThis!Share to TwitterShare to FacebookShare to Pinterest

Somewhere a safety video is being produced, based on this picture alone...