Would you pay to go on this thing?


I've been reading about the new cruise liner, 'Oasis Of the Seas', scheduled to go into service later this year. The statistics are staggering. According to the Daily Mail:

Taller than Nelson's Column, longer than four football pitches - the Oasis Of The Seas, now preparing for her maiden voyage, is the world's largest cruise ship.

It has every imaginable facility, from basketball courts to a wedding chapel, not to mention a spa offering Botox treatment.

0.43 miles is the length of the onboard running track. It's found in the Spa and Fitness Centre, alongside kickboxing classes, tooth-whitening treatments and 24-carat gold facials.

3 years is how long the boss of STX Europe shipyard in Turku, Finland was given to build this mammoth ship. His brief was very particular: a ship large enough for 8,000 passengers and crew, complete with a landscaped park, whopping theatres, casinos and ice rinks, even an onboard hospital. All to be completed in 1,095 days.

6 weeks is how long it took to carve each of the 18 wooden animals on the fairground carousel to include zebras, giraffes and even lions as well as

7 is the number of 'districts' the ship is split into. In the middle is Central Park, a 350ft-long grassy spot with plants, trees and bamboo. The Boardwalk houses a carousel, carnival games and even a fake tattoo parlour. There's also the Royal Promenade, or shopping street; a Pool and Sport Zone; an Entertainment Place and a Youth Zone.

17.9 feet is the depth of the swimming pool in the AquaTheatre. It was built with a 750-seater arena, two surf machines and fountains. Suspended above it are two climbing walls, diving towers and even a trapeze.

32 inches is the size of the screen of the smallest television set onboard. In fact, every cabin (both staff and passenger's) has a highdefinition set that you can use not only to watch films and programmes - but to book spa treatments and on-shore excursions.

22.6 knots is Oasis Of The Sea's cruising speed - not easy given that she often has to change course rapidly and, on occasion, perform the maritime equivalent of a handbrake turn.

50 tonnes of ice are produced onboard every day by special ice machines for 37 bars and more than 20 cafes and restaurants.

72 different types of sweets are for sale at the onboard sweetshop, Candy Beach, enough to keep even the most sweet-toothed passenger happy.

300 is the number of workers given a sneak preview and short ride on the Oasis Of The Seas last week after putting the finishing touches to the onboard luxuries.

82 feet is the length of the zip wire course suspended over nine decks of the ship. It runs through the Pool and Sports Zone, which also houses four swimming pools (complete with water-spouting sea creatures), two 43-foot-high rock climbing walls and even a beach-themed nightclub.

93 different plant varieties are to be found on the ship. There is even an onboard nature guide for botanically inclined passengers.

37 bars, 50 tons of ice: incredible facts about the leviathan of luxury

130 square feet of real gold leaf gilding were used to make the decadent carousel on the Boardwalk.

131 is the number of feet above sea level of the four Jacuzzis, suspended high above the ocean on either side of the ship.

150 miles of pipework run through the ship - and that's not even counting the 3,300 miles of electrical cabling and 100,000 lighting points that all have to be rigged up.

460 slot machines are found in the casino - where better to blow all that holiday cash burning a hole in your pocket? 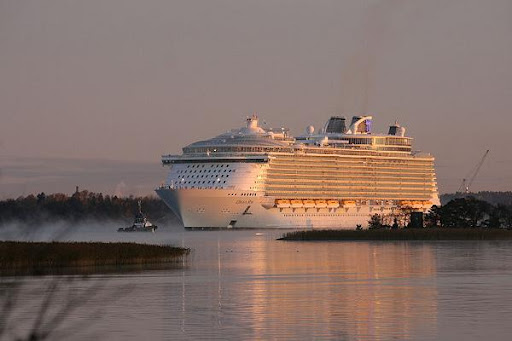 1,187 feet is the ship's length from bow to stern. That's one and a half times the length of Tower Bridge - 800ft - or equivalent to four football pitches. At 240ft, the ship is taller than Nelson's Column.

6,360 is the maximum number of passengers that can fit onboard at any one time - that's more people than can fit in the Royal Albert Hall,which has a comparatively meagre 5,544 seats.

8,000 man years of labour were painstakingly ploughed into building this ship - which is more like a mini country than a boat. But with the combined effort of 3,200 hard-grafting shipyard workers, it only took three years to complete - amazingly on schedule.

10,000 is the square footage of the onboard shops. From Italian jewellers and organic T-shirt companies, to computer game shops and designer boutiques. Oh, and some duty-free, of course.

50,000 pieces of cutlery are kept in the hotel's main dining room, Opus. No doubt, they're all needed - after all, there are more than 500 tables, which can seat 3,056 guests at any one time, so there's plenty of call for the 550 dining room staff too.

60,000 is the number of napkins that guests are expected to use on every voyage.

75,000 is the number of telephone calls that Royal Caribbean Cruises are inundated with every day - from people interested in booking a trip.

600,000 litres of paint were used to decorate the ship. After all, there were 2,706 guest staterooms (that's bedrooms to you and me) to paint, not to mention the shops, bars, swimming pools and entertainment spots.

1,700,000 is the number of hours it took to complete the design and engineering plans alone. And that's before you even think about building the thing.

There's more at the link. (All pictures courtesy of Wikipedia Commons.)

Those statistics are all very impressive, to be sure . . . but they still add up to a mammoth vessel accommodating over 6,000 passengers, in which one's sure to be lost in the 'herd' rather than treated like an individual. Even the lifeboats hold 370 persons apiece! Why should I pay to have such treatment foisted upon me? I'd rather spend my money somewhere I can be given more individual attention, and not made to come and go with the masses. If this is where cruising is going to, I'm definitely out of that mode of leisure travel!

Went on cruise on Liberty of the Seas which is next size down and former largest. Had a great time. Did not feel crowded.
Walt

No thank you. I don't enjoy being in a floating hotel just to be in a floating hotel. Plus I'm not so certain how she would ride in high winds with all that mass above the waterline, and that is one very large target if someone wanted to make a statement of some kind.

Never mind anyone with malicious bad ideas, how about the one SOB who gets on with the flu and gives it to everyone else?

It is an impressive feat of maritime engineering, but I wouldn't go on it.

How the HELL can you ice-skate on something that is on the water?

I have to say, though, that I'm a geek and I think of this in sci-fi terms - if we can figure out how to accommodate so many people like this, imagine if we had a space station that could do something like this! I mean, imagine all of the resources poured into this - if they can successfully manage all of those resources on that thing, we perhaps someday manage those of a space station or a moon base with thousands of people on it!

Sounds like a modern version of the Titanic to me.

It's big, and it's impressive, but from the outside, it ain't pretty. All those decks stacked upon her superstructure, and all the balconies, make her look like a government housing project on a boat.

For an expensive vacation, I'd rather fly to Alaska and pay some guy and his son to take me on their small boat to see the sights and do some fishing and camping. Or maybe he's a pilot with a float plane...