The English still know how to observe Armistice Day


I was very moved to read of the Armistice Day service at Westminster Abbey in England today - particularly because both of my grandfathers fought in World War I. The Daily Mail reports:

Only one man, in this repository of kings and legends, is so revered that none may tread upon his grave.

And yesterday, on the anniversary of his funeral here in Westminster Abbey, he was the focal point as the Queen and the entire nation paid a formal farewell to the generation who fought the Great War.

In recent months, we have lost our last three witnesses of the First World War - Bill Stone, 108, of the Royal Navy, Henry Allingham, 113, founder member of the Royal Air Force and, finally, Harry Patch, 111, the last Tommy, the last man to know what it was really like to 'go over the top'. 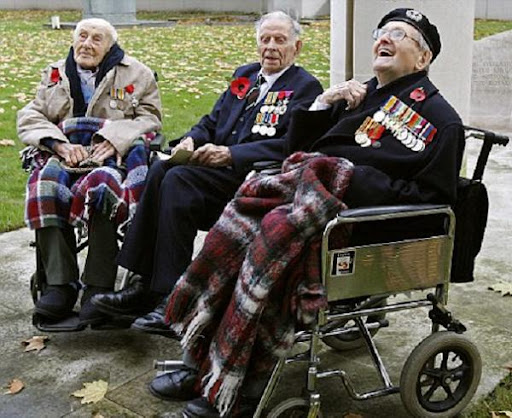 It had always been agreed that, following the death of the last veteran, there should be a formal ceremony to mark the passing of all the men and women who fought that war.

Armistice Day - the day when the guns finally fell silent - was the obvious occasion.

The families of this gallant trio were all invited, of course. Bill Stone's daughter had the honour of reading a lesson. But this was an occasion to commemorate all those involved.

And no one epitomises the sacrifice of that generation more eloquently than the occupant of the Grave of the Unknown Warrior.

It was at his black marble tombstone, flanked by two holders of the Victoria Cross, that the Queen laid her wreath yesterday. 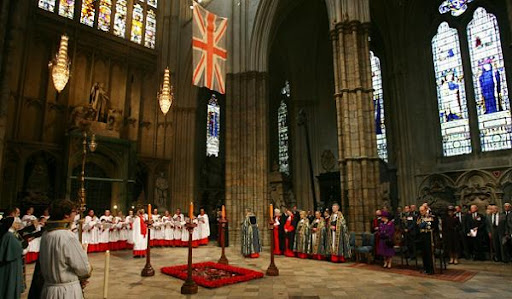 All over Britain, millions were observing the 11am two-minute silence. At the Abbey, not a cough, not even a distant police siren, disturbed the thoughts of the Monarch, Government and Opposition leaders, the diplomatic corps and 2,000 people with some link to the Great War generation.

In his address, the Archbishop of Canterbury, Dr Rowan Williams, spoke of the 'brilliant glow of the Edwardian autumn which...gave way to the cruellest winter conceivable'.

The Great War, he said, had caused so many to rethink their entire religious outlook and yet the survivors had been able to carry on with 'courage and a kind of faith.'

He concluded: 'The generation that has passed walked forward with vision and bravery and held together the bonds of our society, our continent, our Commonwealth through a terrible century.

'May we learn the lessons they learned; and God save us from learning them in the way they had to.'

A huge, old-style wreath was carried the length of the Abbey by Lance Corporal Johnson Beharry VC of the Princess of Wales's Regiment and Trooper Mark Donaldson VC of the Australian SAS - the latest recruit to the most exclusive club in the world.

He won his VC in Afghanistan last year after drawing heavy Taliban fire on to himself in order to save his wounded comrades and then running back into the firestorm to retrieve a wounded interpreter.

These two impossibly brave young men helped the Queen to lower the wreath on to the Grave of the Unknown Warrior.

This must have been an evocative moment for her, too. It was here that she had laid her own bouquet on her wedding day in 1947 - just as her mother had done at her own wedding in 1923.

Hanging overhead was 'the Padre's Flag', the very same Union Flag which lay over the coffin at that state funeral on Armistice Day, 1920. 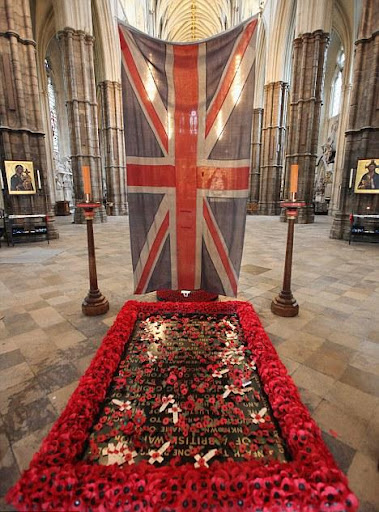 Throughout the war, this flag flew above the trenches, served as an altar cloth or was draped over countless departing coffins by Army chaplain David Railton.

After the funeral of the Unknown Warrior, Mr Railton donated it to the Abbey where it has remained ever since.

There's much more at the link, including more photographs.

God bless the British. They still know how to combine 'pomp and circumstance' with real reverence for their dead. May they never forget them, and always honor them thus!

(By the way, if you'd like to know more about the Tomb of the Unknown Warrior and how his body was selected, see my post for Armistice Day last year. It's quite a story.)

Down Under we stop whatever we're doing at the 11th hour of the 11th day of the 11th month and observe a minute of silence.

In the RSL clubs - popular in just about every major suburb or town - the flame goes on religiously at 6pm every day and everyone stands in silence, faces it and thinks about them for a minute. Without fail.

Had to interrupt a presentation I was doing yesterday for the minute of silence.

Did I mind? Not in the least!
These folks gave a lot for us. The least I can do is give them a minute, once a year.