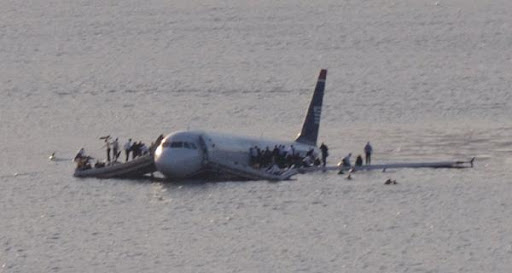 US Airways Flight 1549 in the Hudson River. (Image courtesy of Wikipedia.)

Amazingly, everyone on board survived, with only a few suffering minor injuries.

The animation covers the flight from take-off to crash-landing, and is very detailed, incorporating data from the aircraft, air traffic control, and a host of other sources. It's well worth watching if you're interested in aviation procedures - or even if you're just a concerned passenger on an aircraft from time to time!

Very impressive, and educational. Kudos to Exosphere 3D for producing this.

I'm curious to see how long it takes for syntheses like this to become standard procedure for crash investigations. They did what looks like a very thorough, transparent job of putting a lot of disparate data together.