A German company, Airmatic, has adapted the Marder infantry fighting vehicle used by the German Army for a new role.

A fire fighting tank that can spend more than two hours in a forest fire inferno has begun trials in California and Europe.

The German-designed tank is designed to plough straight through the worst woodland blazes to rescue up to 22 people trapped in their homes. 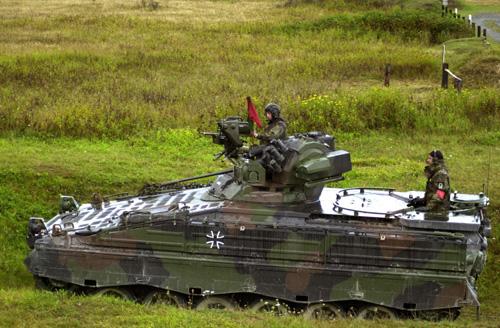 The tank - dubbed RED by defence contractors Airmatic - is currently on loan to fire fighters in America and eastern Germany. 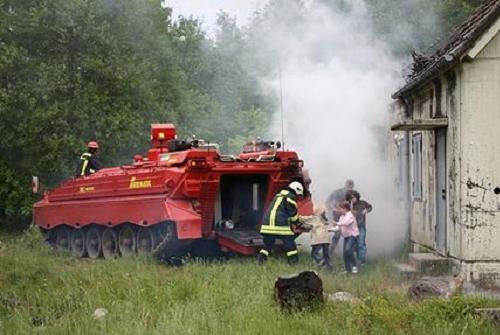 Heat proof armour, water sprays and cooled oxygen piped around the inside of the tank mean it can cope with intense fire conditions.

Michael Henrichs, fire chief in North-Rhine Westphalia, Germany, said: "We will use the tank especially in combating fires after explosions. The big advantage is that it is both a fire-extinguishing and a life-saving vehicle as we can evacuate people with it."

It looks like a very interesting concept, and it's attracting attention from industry professionals. Firechief.com did a review of the RED, reporting as follows:

Airmatic bought surplus Marder A3 tanks from the German government, stripped them of weapons and armor, and installed collapsible water tanks and three nozzles. The tanks have fireproof plating, a 2,900-psi pump, onboard air supply and sprinklers, and a long-range nozzle that can shoot water more than 260 feet. Both the long-range and fog-pattern nozzles are mounted on a swivel base that can be pointed in any direction; both are controlled by a joystick remote controller. A third nozzle has two sprayers attached to a bar at the front of the tank; it is used to extinguish fire in the tank's path. There's also a hook up for a handline. The units require two operators: someone to drive and someone to work the nozzles, and they have a video system that allows the driver and nozzle operator to drive and extinguish while sealed inside. And for rescuing trapped firefighters or civilians, the water tanks can be dumped quickly to make room for as many as eight passengers. 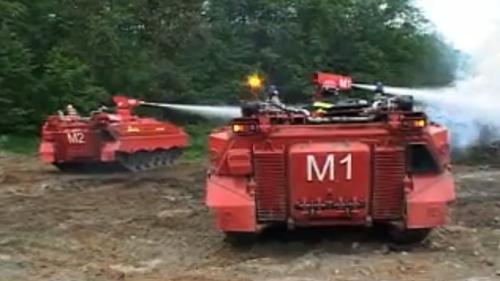 While kept in storage, these Marders were regularly maintained and the engines have less than 2,000 miles, Airmatic says.

Stefan Pöschel, Airmatic's chief marketing officer, says the Marder was selected because of its cargo capacity. To compete with other wildland firefighting apparatus, the tank had to be able to fight fires for an extended time.

Although price is always negotiable, the tanks will sell for less than $1 million each. Airmatic has no plans to open a manufacturing or distribution operation in the United States. Rather, if any orders come in, the tanks will be crated up and shipped. But, the company is more interested in selling its firefighting system than individual tanks.

The system calls for five tanks: four Marders for firefighting and one Leopard A2 for support and ground clearing. It also includes the company's portable water tanks that can hold between 13 and 65 cubic yards, or as much as 18,500 gallons. The company says two firefighters can erect a tank in 15 to 45 minutes depending on tank size.

Another component is a biological fire retardant and extinguishing agent called FireTex. Airmatic recommends blending one part FireTex to 20 parts water. This, Pöschel says, allows the tank to fight fires longer than it would using only water. The company claims it is 20 times more effective than water alone and that it is biodegradable and environmentally friendly.

I'm particularly interested in this development for close-in fighting of wildfires and evacuation of trapped personnel. Whereas a normal fire engine can be overwhelmed by a rush of flames and burn out, causing injuries and death to its crew, those aboard the modified Marders should be insulated from heat and flames, and able to escape even through burning trees and bushes. That's a huge advantage. (As a volunteer with St. John Ambulance in South Africa in my younger years, I had occasion to transport injured fire-fighters to hospital from some of the wildfires in the area where I lived. It was . . . not good. Anything that can protect firefighters from such horrendous injury is a Good Thing in my book, and I daresay most firefighters would agree.)

Here's a video clip of a fire-fighting exercise involving three of the converted Marders.

There are still lots of questions to be answered, of course. I don't see this vehicle working well in very hilly or mountainous terrain, and it still has to be transported to the scene of the fire (tracked vehicles typically require transporters for high-speed movement from their base to where they're needed). The costs are also pretty high. On the other hand, these vehicles might permit rescue and fire-fighting efforts to proceed where all other equipment is inadequate.

I guess time and tests will show just how useful the new vehicle may be. Still, kudos to Airmatic for having the vision to develop it, and its associated systems. I hope the tests turn out well.

They might have piped air for the occupants but what about for the engine? I'd think 800-1000F air would not be good for the engine. Air would be hot enough to ignite any fuel mixture.

Well, it's not quite swords-into-plowshares, but the concept is similar enough! I like it!

It occurs to me that this company could simply become a contractor to fire departments that require this specialized kind of equipment (e.g. during fire seasons out west). If they purchased a surplus C-130 they could transport these vehicles anywhere in the country in less than half a day. This would generate an ongoing revenue stream instead of one-time sales. Remember the movie about oil-well firefighters that starred John Wayne? That's the direction I'd take.