The Austrian Times reports that a Chinese inventor has produced the world's smallest violin.

At less than half an inch long, this tiny violin is, frankly, a bit of a fiddle to play.

But it's likely to scoop its creator Chen Lianxhi, 66, a world record for making the globe's smallest violin. 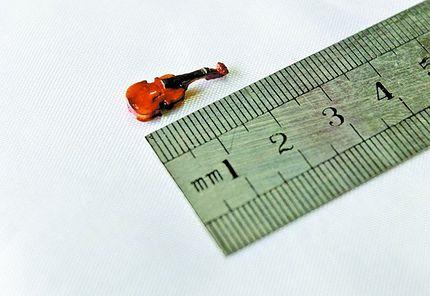 Chen, of Beijing, China, took seven years to craft the tiny instrument from 30 separate parts with strings thinner than a human hair.

"Although it's small each part is just as it would be on a full size violin. It can even play a tune, maybe not as pleasant as a larger instrument but it can make music," said Chen.

That's amazing! I'd love to hear what sort of sounds it can produce. Next challenge - produce a robot small enough (and smart enough) to play it!

Fool. He'll be spending the rest of his life playing the world's saddest song on it.

WOW- 7 years wasted on that? It's neat, but what could he have done productivly in that time????

Does it play "My Heart Bleeds"?