I've written before, in Weekend Wings articles and elsewhere, about the imminent advent of battlefield laser weapons (or, rather, we should call them 'directed energy weapons', since they'll probably involve more than lasers, but all will direct a high-energy beam onto a target).

Boeing and the US Air Force Research Laboratory have just demonstrated such weapons in action against flying Unmanned Aerial Vehicles, or UAV's, shooting down six of them. Boeing's press release stated:

During the U.S. Air Force-sponsored tests at the Naval Air Warfare Center in China Lake, Calif., the Mobile Active Targeting Resource for Integrated eXperiments (MATRIX), which was developed by Boeing under contract to the Air Force Research Laboratory, used a single, high-brightness laser beam to shoot down five UAVs at various ranges. Laser Avenger, a Boeing-funded initiative, also shot down a UAV. Representatives of the Air Force and Army observed the tests. 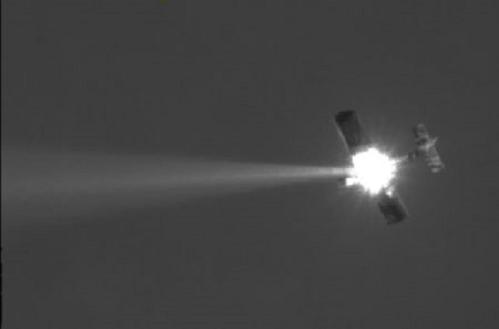 "These tests validate the use of directed energy to negate potential hostile threats against the homeland," Baker said. "The team effort of Boeing and the Air Force in developing MATRIX will pay major dividends for the warfighter now and in the years ahead."

As Boeing points out, both of these systems are relatively low in power, nowhere near the 100kW frequently mentioned as the threshold power level for a battlefield system. If such low-power systems can actually shoot down UAV's, this augurs well for the more powerful systems now under development. (The first 100kW solid-state battlefield laser system, Northrop Grumman's FIRESTRIKE, was announced last year.)

This gets even more interesting when we consider an announcement this week from the Defense Advanced Research Projects Agency, or DARPA.

DARPA is getting ready to move to the next phase of its High Energy Liquid Laser Area Defense System (HELLADS) program to demonstrate a laser weapon system compact enough to be carried on board a tactical aircraft - say a B-1B bomber or an AC-130 gunship - without affecting their ability to perform traditional missions.

The research agency has signalled its intent to award a 24-month contract to either or both of the HELLADS developers - General Atomics and Textron Defense Systems - to build and ground-test a 150kW laser compatible with the requirement for a weapon-system weight of 750kg.

That is substantially smaller than any previous high-energy laser - small enough to fit in one weapons bay on a B-1, leaving the other free for conventional bombs. And much smaller than the chemical Advanced Tactical Laser flown in - and fired from - a C-130 testbed.

HELLADS goes beyond JHPSSL as the plan is to take the lasers out of the lab, integrate them into a demonstration weapon system (being developed by Lockheed Martin), and fire at representative targets - from the ground initially, but DARPA hopes the Air Force will fund a follow-on flight demonstration.

These developments bear very careful watching. The US has been investing a great deal in the development of laser technology. In a surprisingly short time, we've gone from great hulking systems so large they took a fleet of trucks to move them, such as the Tactical High-Energy Laser or THEL: 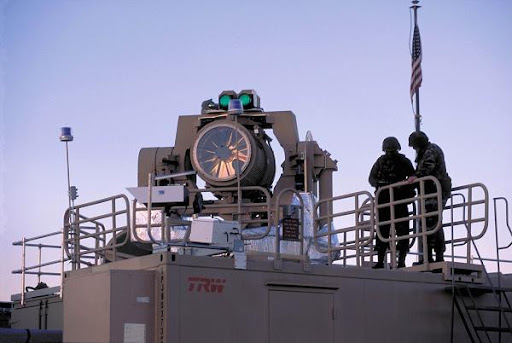 to small solid-state electronic systems that can fit onto one side of a Humvee's missile assembly in the Laser Avenger (shown below). 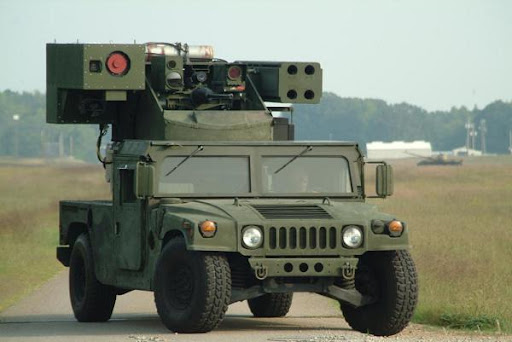 Admittedly, this is still a low-power system, but it won't stay that way. I expect a viable battlefield laser system to be fielded within ten to fifteen years at most. It'll be capable of shooting down any aircraft, missile or other object that can be detected or seen, with a beam that will require no allowance for target velocity or direction, because it'll intercept the target at light speed - i.e. so close to instantaneously as makes no difference. This will effectively render most anti-aircraft missiles and guns obsolete on the spot.

If such a laser can be mounted in a bomber, that bomber will be able to defend itself against attacking aircraft, incoming missiles and the like, rendering it almost invulnerable. Placed aboard ships, such weapons will be able to nullify massed waves of attacking anti-ship missiles. On land, they'll protect military units and bases against incoming aircraft, missiles, artillery shells, rockets, and the like.

Nations that don't have this technology will be scrambling to catch up. I predict massive industrial espionage efforts against the US to try to obtain the secrets of such weapons.

Back in the 1950s the British comic "The Eagle" (Dan Dare) had the Venusians using just such a system. They assembled 3 spaceships with adaptions at the front to form a mirror so that the laser beam (not called that then, I think) could be reflected round the curvature of the planet.

The main problem remains that we don't have a Gharlane of Eddore to chase up anymore...

Let me be the first to say:

I imagine the Chinese already have the information they need, our security is so lax here.

Speaking of HELLADS: Will it make popcorn?

If there's any truth to the rumors, Iran, in the form of Hamas and Hezboallah will be launching a coordinated two-front attack on Israel pretty soon now, firing rockets from Lebanon and Gaza into Tel-Aviv.

Need a test point for a couple or four of these systems?

Seems to me that the laser based defensive systems would come close to making bombers / fighters obsolete as well.

After reading this, I said to my roommate:

Lasers are really cool, but they still don't work well when fired through the atmosphere. Hence the range is rather limited until you get the power levels way up there, which means your power supply tends to be about the same size as 3-Mile Island.

But we're getting better.