First (back in April this year) he bowed to the King of Saudi Arabia. 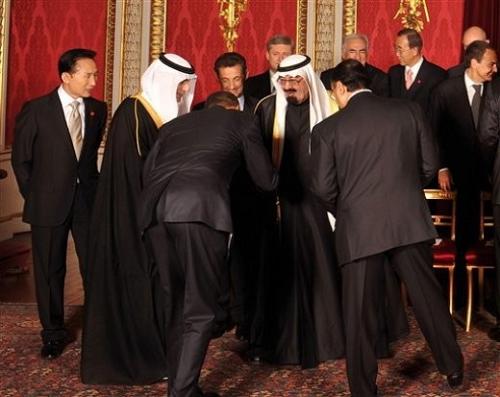 Now he's bowed to the Emperor of Japan. 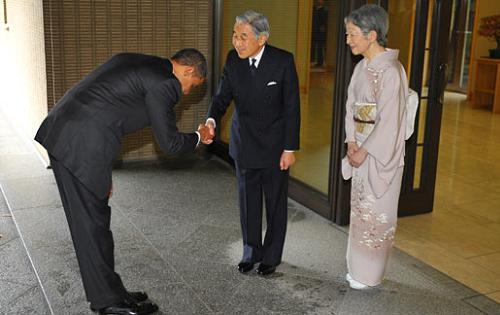 In each case, the cultural connotation is that the one who bows is establishing a subordinate, junior, even subservient relationship between himself and the person to whom he's bowing. Note that neither recipient is returning President Obama's bow in anything like the same degree.

Is the President so gormless that he can't grasp this? Or does he simply not care?

He's not acting as Mr. Obama, private citizen - in which case he's free to establish whatever sort of relationship he wants with those concerned. He's acting in his capacity as President of the United States of America. If he bows to the extent that those watching, from that cultural background, understand that he's just established a subservient relationship, he's doing that for his country, not just for himself - and that's flat-out wrong. The United States is subservient to God - it says so, right on our currency! - but not to any other nation on Earth.

Why is the idiot in the White House congenitally incapable of realizing, or understanding, or accepting this? Or is it that he's happy to portray his country as subservient to others?

Actually I'd put it simpler... we're the fscking USA, we don't bow to anyone.

In Japan, a stiff bow from one's waist of about 5 degrees, with one's arms held rigidly at one's side is a respectful and appropriate greeting.

Bowing as a culturally appropriate greeting, okay. You both bow, you both shake hands, both cultures have been acknowledged.

You don't bow and scrape, you idiot.

Yeah in japan you bow stiff and keep your hands at your sides, it's not a sign of subservience, but of respect. And is typically reciprocated.

I've had a japanese grandmaster of one of the few remaining old styles bow quite deeply to me, off-mat, when I thanked him for everything(not only did he teach very useful things, he also fixed my arm that I hadn't been able to raise fully for years). He's a living legend and he wasn't being subservient. ;)

What an insult to the generations of brave Americans who fought and died so that Americans do not have to bow and scrape to any earthly potentate.

I like the fact you used the cool word "Gormless" in your post! That's an awesome term.

I am surprised he is not on the floor begging- "please, please do not sell your T-Bills!"