Today's title goes, jointly and severally, to the Chinese businessmen and bureaucrats responsible for this mess.

Crackpot planners have driven motorists up the pole - by leaving a 40ft pylon in the middle of a six lane highway.

The unmarked and unlit pole - in Zhengzhou, central China - has been the cause of dozens of accidents as unwary drivers smash into it. 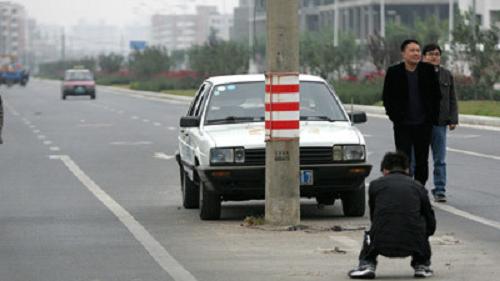 And road signs only a few yards from the pole show an arrow directing drivers right into it at 50mph.

"We have complained to the council but they say it would cost too much to bury the cables underground so we are stuck with it," said local resident Chang Feng, 33.

The problem was caused when the road was widened and made worse when builders added an arrow less than 350 feet from the pole pointing straight at it.

The utility pole belongs to the local power authorities which explained that the pole used to be on the road side, but due to the widening of the road, the pole is now in the middle of the road.

A spokesman from the power authorities said: "They should have informed us before the road widening project, but none of us knew this. Now it's too expensive to move the pole."

One can only pity the people of Zhengzhou for having to live under the 'leadership' of idiots like that . . .

That is the problem with autocratic management: It leaves no room for the little bit of independent thought which could have saved this.

I like the way its in the "Dead" center of the lane. At least it's not in the way of the lane-striping machine.
Eventually, something big and fast enough is going to come along and take it out!

After the "Hell" photos of Chinese pollution that looks almost reasonable.

Oh, I don't know, Peter. Somehow, DOOFUS just doesn't seem to do them justice. There's gotta be a worse description for idiots like that.

WV: shillmed - what BHO is trying to shove on us all.

I like how they explain that they can't move the pole... but completely fail to explain why they don't mark it, light it, or take down the arrow directing people into it.

Don't think of it as a bureaucratic error. Think of it as an extremely efficient crash-causing device that is working as intended.

Someone needs to get "creative", late one night soon, using a crosscut saw and/or an axe...

I suspect the "authorities" would then find it entirely "feasible to re-locate the cables underground.

Sadly, in the high-obedience-to-authority-regardless atmosphere there, it's unlikely this will happen - even if someone is killed soon by colliding with the moronic hazard.