Chalk this one up as a miracle!


I'm astonished to read about a Chinese man who's lost more than half his body - yet is still alive and healthy!

A Chinese man, who had half of his body amputated after being run over by a truck, has amazed surgeons with his recovery.

Peng Shuilin, 37, spent nearly two years in hospital in Shenzhen, southern China, undergoing a series of operations to re-route nearly every major organ or system inside his body. 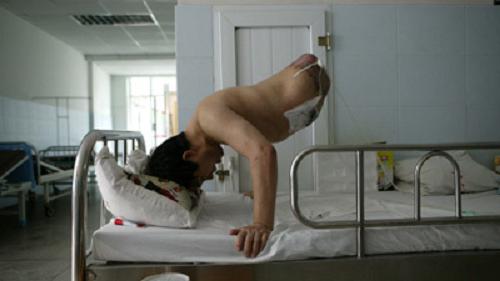 Now Peng - who opened his own cut-price supermarket called the Half Man-Half Price Store - has survived so well he's being used as a role model for other amputees.

At just 2ft 7ins tall, he gets around in a wheelchair and gives lectures on recovering from disability.

"We've just given him a check up and he is fitter than most men his age. He is amazing and the only person in the world to survive having so much of his body amputated," said Bujie Hospital vice president Lin Liu.

"He had good care but his secret is his cheerfulness - nothing ever gets him down," he added.

I'd never have believed it if I'd just heard stories about him. Congratulations to Mr. Peng for his indomitable spirit and will to live - not to mention his sense of humor, naming his shop like that!