Today's title goes to an unidentified division of the Italian police force.

An Italian motorcyclist is appealing after he lost his licence when speed cameras clocked him at an impossible 383 mph.

Paolo Turina, 26 - who also copped a £200 fine [just over US $330] - claims the speed camera was clearly so defective the charge should never have been brought. 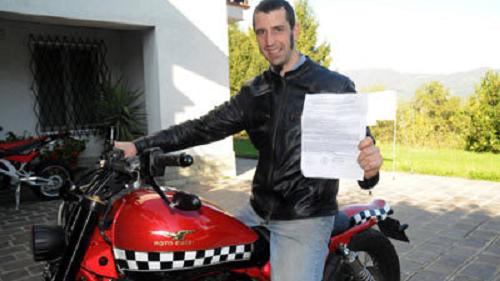 "If I could go that fast I'd enter my bike in the MotoGP world championships. Valentino Rossi would not stand a chance. What did they think they were clocking - a jet fighter?" asked Mr Turina, of Cernusco Lombardone.

"If the court rules the fine will stand then I'm going to send it to the Guinness Book of Records - after all if the court says its true then I should get the credit for this remarkable feat."

The appeal court has not yet made a decision on the case.

One hopes the court will show some sense and dismiss the charge - and one hopes the police will better calibrate their camera next time! As it is, all they're doing is dispensing bragging rights!

I want his Moto Guzzi!