I can sympathize with the San Francisco bus driver of the story below, truly I can . . . but why hasn't he thought about the potential consequences of his actions?

This group of critters regularly queue up for the No.18 bus in San Francisco to get a bite to eat.

The bus stop raccoons have become regular visitors, thanks to the driver’s habit of dispensing treats as he stops off outside the city’s Legion of Honour museum. 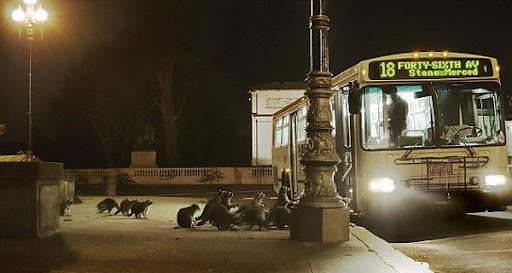 The image was posted by a blogger and has become an internet hit.

Although many posters have described the ritual as ‘cute’, there are fears that once the authorities find out, the animals will be rounded up.

The furry creatures are known to be feisty, clever animals, regularly breaking into people’s houses in search of food.

But experts warn they carry rabies and an ‘intestinal parasitic worm that will cause severe disease if it infects humans.’

Last month a pack of raccoons mauled a 74-year-old Florida woman after she tried to chase them from her back yard.

Sheriff Grady Judd, of Polk County, east of Tampa, said: ‘We’re not talking about a lot of little bites here. She was filleted.’

As the article points out, there's the risk of disease, or of injury to the innocent if the raccoons become dependent on humans for food and - when there's no food forthcoming - take out their frustrations in a violent attack on the nearest people. They're wild animals, dammit! Is that so hard to understand? They're not pets, they're not tame, and they won't behave as such!

And I guess that bus driver will be the first to be angry, and call for an investigation, if some cop on the beat has to shoot a few of 'his' raccoons to stop them attacking a passerby . . .

At a previous place of employment, some of my coworkers started feeding some local raccoons. For the obvious safety reasons (both human and raccoon - it was an industrial setting with plenty of opportunities for squished critter) they were told to stop. Of course, since raccoons are cute they continued to feed them.

Eventually management had to make doing so a firing offense to get people to stop.

That needs to stop, right now. Fire the driver if necessary to educate the rest, dispose of the raccoons in a humane and prompt manner.

w/v: bacown. After the night I had last night, I think I might go get some breakfast, bacown and eggs to preference.

Raccoons can be vicious critters and will readily do serious damage to even a full-grown man. They often do not retreat when threatened (I learned that one the hard way on a camping trip when I was a Boy Scout) This bus driver is an idiot for feeding them. No doubt his actions will come back to bite him, pun intended.

It's all fun and games until the skunks show up.

Coons are cute but they can be extremely nasty. We had a couple who decided to claim our deck and bird feeders last year. As others have noted they absolutely did not back down even when directly threatened by a crazy, apple-throwing human and an entire pack of barking, snapping dogs.

A 22 finally solved the dilemma.