The blindness of 'green energy' proponents


I was irritated by the sheer superficiality of an opinion piece on CNN this morning. The author, Roland Martin, titled his column 'U.S. must finally end its addiction to oil'. Here are a few excerpts.

Three years ago this nation went through convulsions when gas prices skyrocketed. Folks were sharing rides and pushing elected officials to broaden public transportation plans. Hybrids and electric cars started getting a second look from gas conscious drivers, and all the talk was about alternative energy and not being dependent on Arab leaders in the Middle East.

And when those gas prices went back down? We yelled, screamed and cheered, and then pulled the SUVs out of the garage, filled them up with gasoline and forgot all about the pain we endured.

This is the American story: Alleviate our pain so we can go back to business as usual. And when the crisis comes back, we'll fret, scream and go bonkers.

When are we simply going to reach the conclusion that as long as this nation has a Charlie Sheen-like addiction to gas, our chains can be yanked at any time, which will send our economy into a tailspin?

Democrats and Republicans are now saying President Obama needs to allow for more drilling off the shores of the United States. Really? So that's the only answer? Everyone knows there isn't enough oil to satisfy America's thirst. But oh no, we keep this charade up.

America will never be able to transition our system from an oil-dependent economy to an alternative plan unless we show the courage to make the tough choices today and get the payoff later.

Embracing non-oil energy alternatives -- wind, natural gas, electric and solar -- can absolutely create jobs in this country, and we should require Americans to make their homes more energy efficient with products built by Americans. What's wrong with that? How can the United States create solar technology and then allow the Chinese to become the leading manufacturer of wind turbines and solar panels?

No one alternative energy source can replace oil. It has to be a comprehensive plan that addresses our long-term needs. And it is going to mean we will have to spend money. Yes, we will be affected in the short-term, but if someone told me we could spend $500 billion today, and that would create millions of jobs over the next several years and lead to a transition to an alternative-energy economy, I would ask where I should sign up.

Sounds great, doesn't it? Logical, rational, and all those good things? Trouble is, it's a tissue of presumptions, half-truths and wishful thinking. Let's examine each of Mr. Martin's arguments in turn.

"... as long as this nation has a Charlie Sheen-like addiction to gas, our chains can be yanked at any time, which will send our economy into a tailspin" 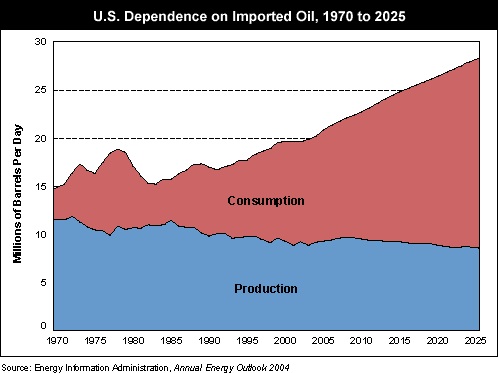 and refuse to allow new refineries to be built ("...oil companies in the U.S. perceive obtaining a permit to build a modern refinery to be so difficult and costly that no new refineries have been built ... in the U.S. since 1976. More than half the refineries that existed in 1981 are now closed ..."), then our chains can be yanked. However, to the extent that we produce more oil from our own reserves, and permit old, outdated refineries to be supplemented by new ones, we immunize ourselves against chain-yanking by outside influences. U.S. oil reserves are far greater than many suppose - "shale resources alone are actually three times larger than the proven reserves of Saudi Arabia".

I suspect the real reason we're not exploiting US oil reserves more fully is that environmentalists and Left-wing politicians don't want us to exploit them - they'd rather force us to develop alternative energy resources (see the last two paragraphs I quoted from Martin's article above). Unfortunately, this is also a pipe-dream. As environmental scientist Kenneth P. Green points out in a recent article:

To understand the fallacy of the government creating green jobs through subsidies and regulations, we have to refer to the writing of French economist Frédéric Bastiat. Back in 1850, Bastiat explained the fallacy that underlies such thinking in an essay about the unseen costs of such efforts. He called it the "broken window" fallacy.

The fallacy works as follows: imagine some shop-keepers get their windows broken by a rock-throwing child. At first, people sympathize with the shopkeepers, until someone claims that the broken windows really are not that bad. After all, they "create work" for the glassmaker, who might then be able to buy more food, benefiting the grocer, or buy more clothes, benefiting the tailor. If enough windows are broken, the glassmaker might even hire an assistant, creating a job.

It is well understood, among economists, that governments do not "create" jobs; the willingness of entrepreneurs to invest their capital, paired with consumer demand for goods and services, does that. All the government can do is subsidize some industries while jacking up costs for others. In the green case, it is destroying jobs in the conventional energy sector--and most likely in other industrial sectors--through taxes and subsidies to new green companies that will use taxpayer dollars to undercut the competition. The subsidized jobs "created" are, by definition, less efficient uses of capital than market-created jobs. That means they are less economically productive than the jobs they displace and contribute less to economic growth. Finally, the good produced by government-favored jobs is inherently a non-economic good that has to be maintained indefinitely, often without an economic revenue model, as in the case of roads, rail systems, mass transit, and probably windmills, solar-power installations, and other green technologies.

Green goes on to analyze (in some detail) efforts in Spain, Italy, Germany and Denmark, which have all placed great emphasis on 'green' jobs and energy, and spent large sums on developing this field, only to encounter enormous waste, corruption and inefficiency. They have received extremely poor returns on their investment. He concludes:

Both economic theory and the experience of European countries that have attempted to build a green-energy economy that will create green jobs reveal that such thinking is deeply fallacious. Spain, Italy, Germany, and Denmark have all tried and failed to accomplish positive outcomes with renewable energy. Some will suggest that the United States is different, and that US planners will have the wisdom to make the green economy work here. But there is no getting around the fact that you do not improve your economy or create jobs by breaking windows, and US planners are no more omniscient than those in Europe.

Bold print is my emphasis.

America will never be able to transition our system from an oil-dependent economy to an alternative plan unless we show the courage to make the tough choices today and get the payoff later.

This is just as stupid as Nancy Pelosi's infamous comment about Obamacare: "... we have to pass the bill so that you can find out what is in it ...". How can we possibly make 'tough choices' when there's no guarantee whatsoever that the payoff will be positive? Please read Kenneth Green's article, linked above. He points out that every 'tough choice' Mr. Martin wants, when tried in four European nations, led to negative consequences every time. Why should the same choices produce different results if tried here? As for getting the payoff 'later', what guarantee is there that there will be a payoff? How do we know that we won't be dumped deeper into debt instead? If investment in 'green' energy, jobs, etc. has not produced a positive return in other countries (and it hasn't - not anywhere), why should it do so in the USA? And if there's no 'payoff', why should we invest in it at all?

The only investment I'm prepared to support is one that offers a positive return overall. That positive return must take into account the impact of the investment in financial, environmental, social and macroeconomic terms. It's no good having something that's wildly positive in one area, but wildly negative in another. The overall impact across all areas must be considered, and the solution that's best on aggregate, balancing positives against negatives, is the one I'll support.

I have no objection to including 'green' solutions in the mix, and considering them against other, more traditional solutions: but unless and until they make sense, not only in environmental, but also in financial, social and macroeconomic terms, I'm not prepared to support them. At the moment, they appear to offer more of a 'warm fuzzy feeling' than a rational solution to our energy problems. Mr. Martin's column is a morass of such 'warm fuzzy' opinions. Unfortunately, it falls short of hard economic reality.

I am curious about why fusion power isn't the national priority the way the Apollo project was; Such a source of heat could supply electricity to wit's end, leaving fossil fuels to be used to their strengths. (Cars and airplanes, namely.)

I sometimes wonder how many of the "Green energy/ clean energy" claims would never have been made if more people had learned basic science in school. The laws of thermodynamics, for example: that you will lose energy when you burn gas to run turbines to make electricity to use for heating, that the power and material inputs into some types of "clean" power producers exceed the potential energy output, et cetera.

Then I remember how much "green energy" is about politics instead of science.
LittleRed1

Master Martin is a moron incapable or unwilling to understand thermodynamics, let alone the definition of energy density of power sources. But no doubt he believes that "Big Oil" bought up the patent to a 300 mpg carb and has it buried in the back.....
He should go back to writing about sightings of the BatBoy.