The lighter side of submarine training


I'm currently reading the book "Submarine Commander" by the late Paul R. Schratz. It's an account of his service in US submarines during World War II and the Korean War. So far, I'm enjoying it very much.

In early 1942 Schratz reported to the US Navy's Submarine School in Groton, Connecticut (part of the New London urban area). Students trained aboard World War I-vintage O Class submarines, eight of which had been reactivated from the Reserve Fleet for training duties. 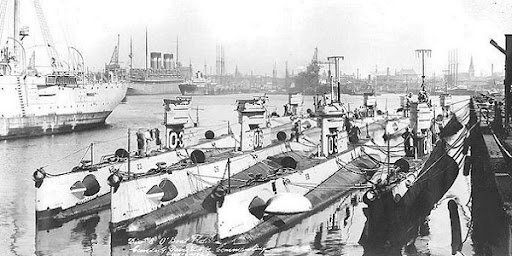 Schratz has this to say about one early wartime experience.

At New London, parking was available for submariners at the head of the finger piers. Should a submarine be brought alongside at too high a speed, or if a backing bell failed to be answered, the heavy, protruding bow on occasion overrode the dock and damaged the car parked at the head of the pier. To emphasize the need for caution in avoiding a possible submarine-auto collision, the first parking place was reserved for the skipper of the submarine, thereby guaranteeing the enthusiastic co-operation of the CO in preventing possible damage to a U.S. naval vessel, if only to avoid more serious damage to the family wheels. Insurance claims based on collisions between submarine and automobile in New London were unusual but far from unknown.

I wonder what the insurance companies' reaction was to such claims? Did they sue the US Navy for salvage rights?

That's a name that brings back memories, but of a job, not a submarine. I worked for John Schratz, a nephew (I think) of Captain Paul Schratz, but I did not learn of the relation until after Captain Schratz had passed away.

More submarine reading, on the off chance that it's new to you:

Clear the Bridge! : The War Patrols of the U.S.S. Tang (Richard O'Kane).

And, the patrol reports of US WW2 Submarines, online at http://hnsa.org/doc/subreports.htm

O'Kane's writing is just delightful, with enough technical detail that you can get a sense of the tension and drama without someone having to tell you "this is dramatic, right here."

Thanks, Wayne. I have both of O'Kane's books, but I wasn't aware of the online combat reports. I can see I have lots of reading ahead!

"I'm the galloping ghost of the Japanese coast
You don't hear of me or my crew -
But ask any man off the coast of Japan
If he's heard of the 'Trigger Maru'!"

Yes, I grew up reading too many WWII Navy books. Why?
LittleRed1