LiveScience has an interesting article about why March 20th is the first day of spring in 2011. Here's an excerpt.

The first day of spring arrives on varying dates (from March 19-21) in different years for two reasons: Our year is not exactly an even number of days; and Earth's slightly noncircular orbit, plus the gravitational tug of the other planets, constantly changes our planet's orientation to the sun from year to year.

This year, spring starts Sunday, March 20, at 7:21 p.m. EDT (23:21 UTC). That's when the so-called vernal equinox occurs. Equinoxes (which mark the onset of spring and autumn) and solstices (which mark when summer and winter begin) are points in time and space that mark a transition in our planet's annual trip around the sun.

At each equinox, the sun crosses Earth's equator, making night and day of approximately equal length on most of the planet. At the equator, the sun is directly overhead at noon on either equinox. However, day and night are not exactly equal on the date of the equinoxes. For instance, at higher latitudes in the Northern Hemisphere, the "equal day and night" occurs a few days before the spring equinox, while in the Southern Hemisphere that date comes after the March equinox, according to the National Weather Service.

There's more at the link. Interesting facts, including some I hadn't known before.

Another article at LiveScience warns that spring flooding has already begun in the USA, and more is expected. Apparently a large part of the country is facing an above-average flood risk this season. 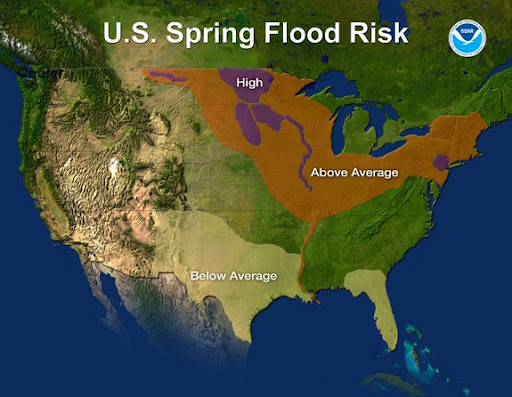 If you live in or near the purple- or brown-shaded area of the map, you might want to take precautions.

I remember 1993. Quite clearly. That was some epic flooding.

They've been talking about the possibility of flooding on an impressive scale again. They were saying that last year too, but we never quite got all that much. We'll see if this year is different; it's nice being close to major rivers but NOT in a flood plain.

They started sandbagging a month ago in Fargo, from what I've heard.