I can hardly believe the extent to which a Chinese dog-fancier was prepared to go to secure his latest pet.

Big Splash, or Hong Dong in Chinese, was bought by a coal baron from the north of China. 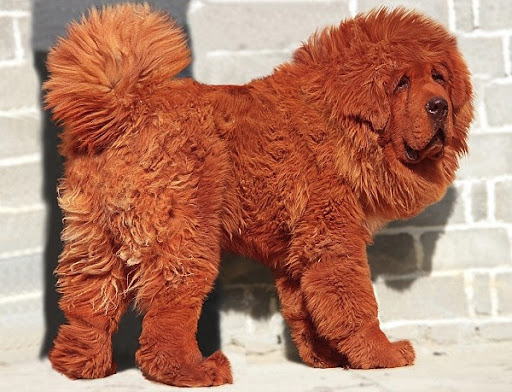 And it's lucky his new master is a multi-millionaire, because the hefty price tag doesn't factor in Big Splash's diet - enough chicken and beef to fill a growing 180lb dog, spiced up with Chinese delicacies such as sea cucumber and abalone.

His owner will need a big house too, as adult Tibetan mastiffs have been known to weigh as much as 286lb - the same as a sizeable rugby player.

But according to breeder Lu Liang, Big Splash is a 'perfect specimen' and the extravagant price for the 11-month-old is completely justified.

He said: 'We have spent a lot of money raising this dog, and we have the salaries of plenty of staff to pay' – adding that the new owner could charge almost £10,000 a time for Big Splash to breed with a female.

The high price paid for the dog is a sign that the red Tibetan mastiff has become a status symbol in China, replacing jewellery and cars as a way for the super-rich to show off their wealth. 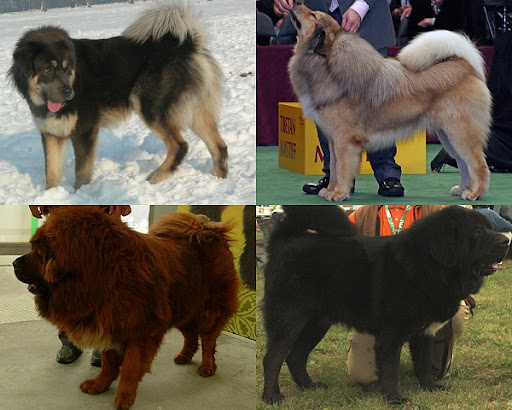 Colors of the Tibetan mastiff (images courtesy of Wikimedia Commons)

Not only is red considered a lucky colour, but Tibetan mastiffs are thought to be holy animals, blessing their owners' health and security.

Tibetans believe the dogs have the souls of monks and nuns who were not good enough to be reincarnated as humans or into Shambhala, the heavenly realm.

I've come across Tibetan mastiffs before, and I like them very much; but to spend 1½ million dollars on a pet??? Verily, the mind doth boggle!

Here's an Animal Planet report on the breed. It gives a bit more information about how highly the Chinese regard the breed.

Nice doggies . . . but then, for that sort of money, they'd better be!

Labels: Animals, Boys and their toys, Economics, Interesting facts, The Mind Boggles
Email ThisBlogThis!Share to TwitterShare to FacebookShare to Pinterest

Considering what the dog will pull for stud service, the owner might have his investment back - or at least substantially defrayed - in pretty short order.

For that money, the dog better be able to get his own job, cook dinner, and take himself for a walk.

Hope at least one of the owner's staff is a damn good dog trainer. Tibetan mastiffs can make Rottweilers look mild when it comes to how seriously they take a guarding job... which they will self-appoint.

Not a beginner pet.