How they saw the future, 100 years ago


The blog Paleofuture has published a couple of very interesting posts in recent weeks.

The first reproduces an article from the December 1900 issue of Ladies Home Journal, titled 'What May Happen In The Next 100 Years'. Here are a few of its forecasts.

The American will be Taller by from one to two inches. His increase of stature will result from better health, due to vast reforms in medicine, sanitation, food and athletics. He will live fifty years instead of thirty-five as at present - for he will reside in the suburbs. The city house will practically be no more. Building in blocks will be illegal. The trip from suburban home to office will require a few minutes only. A penny will pay the fare.

Everybody will Walk Ten Miles. Gymnastics will begin in the nursery, where toys and games will be designed to strengthen the muscles. Exercise will be compulsory in the schools. Every school, college and community will have a complete gymnasium. All cities will have public gymnasiums. A man or woman unable to walk ten miles at a stretch will be regarded as a weakling.

Man will See Around the World. Persons and things of all kinds will be brought within focus of cameras connected electrically with screens at opposite ends of circuits, thousands of miles at a span. American audiences in their theatres will view upon huge curtains before them the coronations of kings in Europe or the progress of battles in the Orient. The instrument bringing these distant scenes to the very doors of people will be connected with a giant telephone apparatus transmitting each incidental sound in its appropriate place. Thus the guns of a distant battle will be heard to boom when seen to blaze, and thus the lips of a remote actor or singer will be heard to utter words or music when seen to move.

Few Drugs will be Swallowed or taken into the stomach unless needed for the direct treatment of that organ itself. Drugs needed by the lungs, for instance, will be applied directly to those organs through the skin and flesh. They will be carried with the electric current applied without pain to the outside skin of the body. Microscopes will lay bare the vital organs, through the living flesh, of men and animals. The living body will to all medical purposes be transparent. Not only will it be possible for a physician to actually see a living, throbbing heart inside the chest, but he will be able to magnify and photograph any part of it. This work will be done with rays of invisible light.

There are many more forecasts at the link. Some are fanciful, others appear remarkably prescient.

The second article shows a collection of prints in the National Library of France, dating from 1910, which depict the world of the year 2000 as foreseen by the artist(s). Here are a few examples. 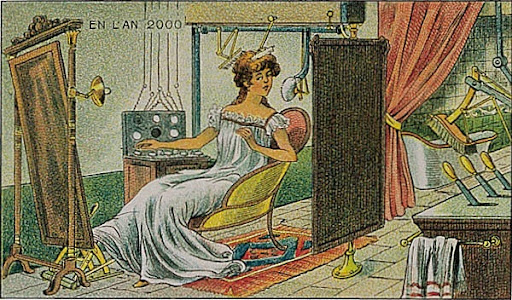 A Lady in her Bathroom 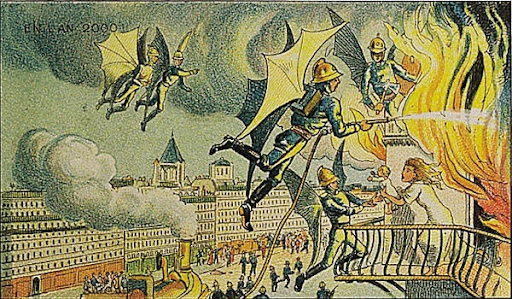 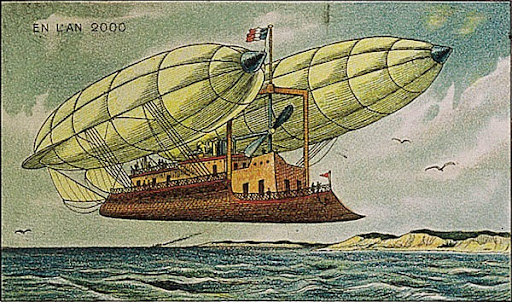 There are many more images at the link.

Both articles are interesting and amusing reading. Recommended.

Thank you for the cue, Peter. I think I'll enjoy this one particularly.

Ok, now that that is out of my system, the Ladies Home Journal was not that far off, except for the physical fitness portion. As an aside, LHJ also had articles in 1917-1918 discussing what we would now call PTSD and very frankly (for the time) explaining what women needed to do when their husbands/brothers/sons had war injuries and disfigurement. It could be a very forward-looking and practical journal at times.
LittleRed1

Looking at the pictures, I forget that 100 years ago, the Wright brother's first public flights were only a few years before.

Was the average life expectancy in 1900 still only 35? Seriously?

I thought that was like, Medieval era stuff. Not Victorian.

perlhaqr, until the rise of vaccines and sanitary water, TB, yellow fever, cholera and other infectious diseases, plus childhood mortality from measles, mumps, diptheria, scarlet fever and other causes, plus childbed mortality among women, kept the life expectancy down. If you made it past age 15 and you were male, you had a good chance of living longer than 35 years, provided you didn't get trampled by a horse, injured during work, or contract the aforementioned TB, cholera, or smallpox.

Part of my research work involves looking at death records from the early 1900s, and those are among the most common causes of death I've found and read about.
LittleRed1

1900. My father was 26 in 1900; and one of the leading lights in the local gymnastics club. Whose members did things that seem incredible now.

Like hanging from their knees and in sync and to a metronome "reverse press" their body weight in kettlebells to their waists. With alternating hands and in strict German style.

Gold was $16 an ounce, a working mans pay was a dollar a day, and candy was a half cent an ounce. A penny? About equal to a dollar in purchasing power now.

Adjusted for fads and inflation, the authors did fairly well. It just looks odd to us because the telescope has become a microscope.