This is too nifty for words!

It folds up and unfolds with what looks like incredible ease and simplicity. Here's a video demonstration.

It has disc brakes, and integrated front and rear LED lighting. It's powered by a small electric motor and a battery similar to that of a laptop computer. It's claimed it can recharge within four hours (either on the bike, or taken off and recharged separately, so you could have a second battery charging while you ride around using the first - or take a second battery with you for longer-distance rides). The battery's claimed to have a range of 12-24 miles, depending on terrain and how much you use the pedals to assist it.

European Union and Swiss legislation limit the maximum speed of the Voltitude to about 15½ miles per hour on motor power. (Of course, you can pedal faster, or exceed that speed while traveling downhill.) 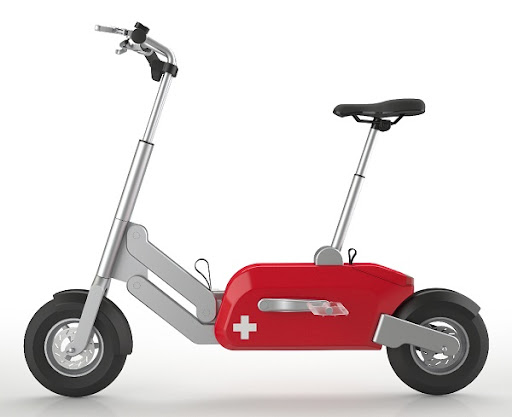 The Voltitude is presently in pre-production, and is being sold only to Swiss buyers. It goes on general sale later this year, and can be ordered over the Internet. You'll find more information about it at the link.

(No, I'm not being paid to advertise it - but it looks so nifty that I want one! It might be just what the doctor ordered for a partly-disabled person like me. I'll be interested to see whether the price is affordable.)

Gay Cynic needs to see this, he'll probably have a market for them!