I've never understood the mentality of those who find a woman writhing around with a snake to be somehow attractive or 'sexy'. It leaves me cold. Nevertheless, I can't help feeling sorry for a snake in Spain.

A SNAKE died of silicone poisoning - after biting a girl on the BOOB.

She was clutching the tame reptile and went to lick its face when the snake took offence and chomped down on her surgically-enhanced bosom. 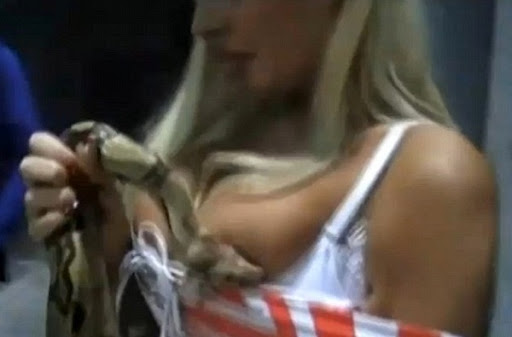 Fox was taken to hospital where she given a tetanus shot and discharged.

But the snake wasn't so lucky.

There's a video clip of the incident on YouTube (from which the still image posted above was taken). I won't embed it here, partly because I find it anything but attractive, and partly because it's probably not safe for work: but if you want to watch it, you'll find it here.

Meanwhile, I feel more sorry for the late snake than I do for Ms. Fox!

Yep, the snake LOST on that deal... The ONLY good snake is a dead snake!

I hate to admit it, but I really thought it was a funny clip. Some people think they can take wild animals and act like they are tame. Schadenfreude I suppose, but still deserved. I am so going to H*ll.

Bulletin from the Dept of You Can't Make This Shit Up.

Poor snake. I would not touch that "woman" with a stick.

Snakes eat rodents and most do naught but good. I see an idiot fucking with an inoffensive creature that finally objected to being manhandled by a pneumatic ape.

My husband is fond of the saying "More than a mouthful's a waste."

In this case, would it be approriate to say that the mouthful wasted the snake?

A long-ago bimbo room-mate owned a very tame beautiful boa. Through a series of stupid events she gave the snake a bath in the tub and it got itself wedged in the soap thingie - you know, it's a tile inset with a shelf for the soap and a bar for the washrag.

Snake got himself wedged; we wound up using olive oil to lube him and were poking him gently to encourage him and letting him climb on us so he had some reason to move, then used corn starch to soak up the garlic infused oil. We did not cook him. But he was beautiful once he was clean. And he never offered to bite while we messed with him.

What did that idiot do to the poor thing?

Hmm, Eve and the snake perhaps?

I think between the botox in that horror's lips and the silicone in its "frontage", the snake picked the faster way to die...