Glad for a friend, sad for her car


My friend FarmGirl had a close encounter of the less-than-desirable kind with a Colorado elk on Friday. 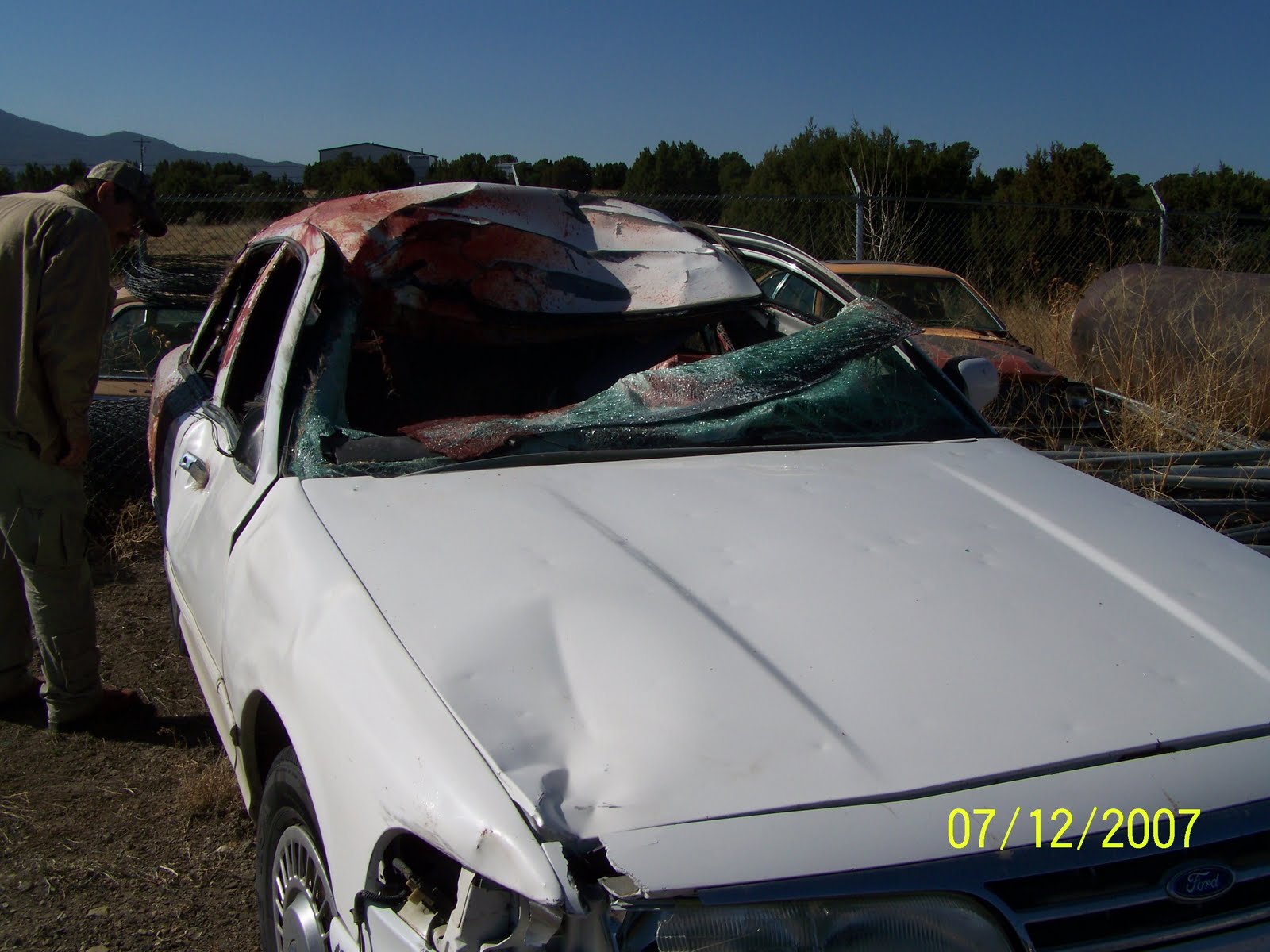 She's all right, but her new-to-her Ford Crown Victoria is totaled - and the elk is just a smear on the road! To add insult to injury, the title for the car arrived by post today. She seems to be OK, apart from a long list of bruises, bangs and scrapes. I'm very happy she's still around, to put it mildly!

This accident is the perfect illustration of my concerns with modern 'econocars'. They may be light and economical, but in an accident, they crumple up like tinfoil. Despite all the safety devices like airbags, crumple zones and the like, graphically illustrated in video clips of crash tests conducted by the Insurance Institute for Highway Safety, the occupants of these small vehicles are at significant risk of injury. A couple of weeks ago, Miss D. and I passed the scene of an accident on a local interstate. A Nissan Cube had been struck from behind by a heavy truck. The whole rear of the light car, from rear gate to halfway along the front doors, had crumpled into a flattened sheet of tinfoil and shattered glass. I don't know what the injuries might have been to anyone in the front seats, but I suspect anyone in the rear wouldn't have lived long enough to know what hit them.

That's one reason I drive a 2005 Ford F150 pickup. After my spinal injury in 2004, followed by two surgeries (including a spinal fusion), the neurosurgeon told me very, very seriously that if I ever injured my spine again, in the same location, I'd either be paraplegic, or dead. His advice was to drive something that offered adequate protection, in case of an accident . . . to use his words: "Something with enough metal beneath you and around you to take care of business".

FarmGirl just found out the hard way how good his advice was. I shudder to think of the condition my friend might be in right now if she'd been driving an econocar! Go read all about her adventures at her blog. There are lots more pictures, too, if you scroll down.

You usually WANT your vehicle to deform in an accident.

Better that the energy of the crash is spent deforming body panels that can be replaced (either individually or by replacing the car) than on the people inside (who are much harder to replace). The only caveat is that the passenger compartment should remain unviolated- if there in intrusion into the cabin, there's a problem.

Even larger vehicles today are meant to deform in a wreck, not just the econocars, because it's safer for the occupants for the engine and cargo compartments to give their lives to the cause.

Concur Peter... And that is why I drive a Yukon... Glad FG is okay too!

I recently saw a video of a (deliberate) offset head-on collision between a 1959 Chevrolet Belair and a 2009 Chevrolet Malibu.

Result? The modern car crumpled as designed and gave its life so that the crash test dummy was uninjured - the 1959 model flew to pieces and its "passenger" was dead at the scene.

I would be concerned about driving an SUV or pick-up and expecting it to perform better than a full size modern sedan in a collision - IIRC they don't even have to meet the same occupant safety standards.

Raving Prophet, Sendarius - sorry, I don't buy it. The 1959/2009 collision highlighted design advances made in the past 50 years, and showed the modern car in a very good light: but if the light-versus-heavy argument were true, then an M1A1 Abrams tank would lose in a collision with a Humvee. Guess what? Ain't gonna happen.

Modern design features certainly count for a lot, but in the end, all other things being equal, mass, weight and size will offer fairly decisive advantages. If I get hit by something really big, it doesn't matter what I'm driving - I'm in real trouble. On the other hand, if I'm hit by anything smaller than a Crown Victoria or SUV, I'm willing to bet the size and weight of my F150, plus its modern protective design features, will be on my side.

All other things being equal, you are right. Mass has its advantages. I will speak up in anecdotal defense of the modern car, however.

As a paramedic and 20+ year volunteer firefighter, I seem to see more crashes now than ever. I also see fewer serious injuries and more walking wounded. The engineering and safety features work, at least here in suburbia at sub-highway speeds.

Of course we don't have moose or elk around here, and if you tangle with an 18-wheeler you will lose. That will never change.

To sum up what the state of engineering is, it's not really so much that "Big" automatically beats "Small" -- a modern full size sedan will probably protect you better than a 1969 full size pickup, if both are hit by roughly teh same mass vehicle in roughly the same location. Don't forget -- ALL of that energy is going SOMEWHERE, and it's generally better if it is used to bend metal than transmitted as shock to the "Spam wrapped around Twigs" in in the passenger compartment.

But it doesn't hurt to drive the biggest new-ish vehicle you can. 1999 Yukon vs. 2010 Smart Car at 55mph? The Yukon driver's gonna have nightmares. . . and the ME's gonna break out a Shop-Vac.

Just typed up a decent reply about bigger/heavier being only one of the variables, and while it helps, it won't replace a good modern crush space with modern materials.

I am of the opinion that if I'd been driving anything much lighter the physics would have screwed me. Either the roof would have peeled on off and the elk would have landed in my lap or I wouldn't have had enough mass to effect the elk more than it effected me, with the way he hit.

The modern crash protection stuff is great but even my enormous omg strong crown Vic the door posts to either side of the windshield did things that are generally considered bad.

I'm not saying I won't get a more modern car this time but it's a case of price range and fuel mileage rather than any inherent stability. Having to buy a second car in two monts gets in the way of any moral high ground I may have had over ANY car.

Sendarius: I would like to have seen what would have happened with a '69 Chevy instead of a '59. The '59 GMs were on an X frame, as opposed to a perimeter frame, and also had a more modern A pillar line, as opposed to the curved ones of the late 50's which are almost designed to fold, the way the one in that video does.

But this is more an issue of "rollover protection" structure, not frame design. The Crown Vic is body on frame, so it's strong enough at that level, but FG practically needed a roll cage to have prevented that roofline separation.

WV: "imparth" -- The Elk doth imparth too much energie unto the carre.

I used to drive a 98 Yukon. It gave it's life protecting mine in a tbone accident. Goofus ran a red about 5 seconds late and caught me under the driver door. He was a bit lower than I was, I wound up on his hood. Bent my Yukon like a banana, but all I got was a small patch of rug rash on my left shoulder. Seems the seat was moving faster than I was at the time.

Glad you lived through it FG. Highway butchery is ugly business. I've had a doe go through the grill into the water pump once. I think being physically a bit above the line of force is a plus too. She went in the grill not over it.

If the Pontiac had hit me IN the door, I'd have been laid up for a few months or under the sod.

Yes, weight and design both matter (speaking as an engineer). Recently I found a website that considers both weight and crash test results in giving a combined safety score. It's helped me narrow the field a lot while shopping for a new car.

The pdf charts are at www.informedforlife.org. Click on Ranking Lists at the top left, then scroll down to the bottom and find "2003-2010 Vehicle risk index SCOREs."

Find yourself something safer, Peter. We can't do without you and your blog!

I dug into the formulae behind the scores at InformedForLife and found some misleading assumptions.

If there are no IIHS test results for a model, then they assume that it would do pretty poorly (A/A/M/P). So if you see a car that has good NHTSA scores in their table, but blanks for IIHS, you can assume the SCORE should be about 25 points lower if its stablemates did well in IIHS (say, G/G/A/M).