I had to smile at a report in the Telegraph newspaper in London.

It's minus 30 degrees centigrade [-22° Fahrenheit], but I'm sweating profusely. I'm driving a car with no roof at a speed that must boost the wind chill factor to a thoroughly frostbiting figure, and yet things continue to heat up inside the cockpit.

Arms are twirling and pedals pumping in an effort to keep my Mazda MX-5 pointing in approximately the right direction on a track carved into the snow on the surface of a frozen lake. Adding to the heat is the pressure of another 19 drivers in identical MX-5s all trying to get round the same circuit at the same time. 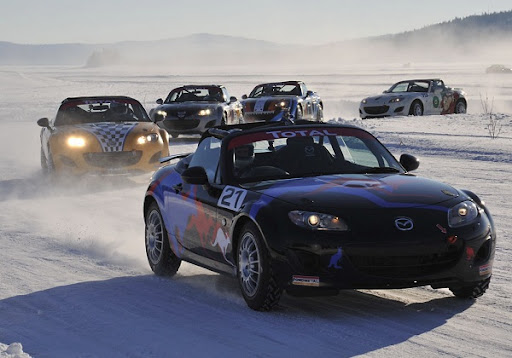 Welcome to the splendidly organised chaos of the first ever international Mazda MX-5 Ice Race.

The event is part of an ongoing celebration of MX-5 milestones. Last year it was 20 years since the little roadster first hit showrooms. Now the 900,000th model has rolled off the production line, confirming its status as the world's best-selling two-seater sports car. Seems like a good enough reason for a party to me. 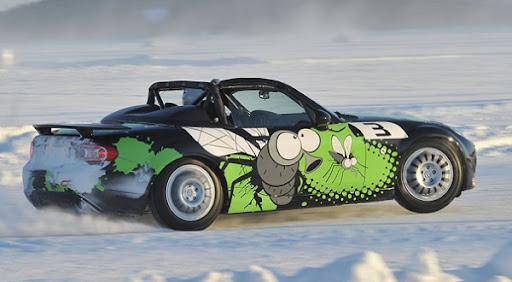 And what a party this is. The venue is Kall Auto Lodge at Lake Kall near Ostersund, Sweden, a 130-metre deep, 40km wide man-made body of water that, during winter, freezes to a depth of 60cm. That may not sound much, but it's enough to support a fleet of cars barrelling along a twisty 4.5km long track.

Get caught behind a slower car on the straight and it's like driving inside a freshly-shaken snow globe. The rear wheels of the car ahead kick up huge rooster tails of snow and ice as their skinny spiked Black Rocket tyres bite into the surface. 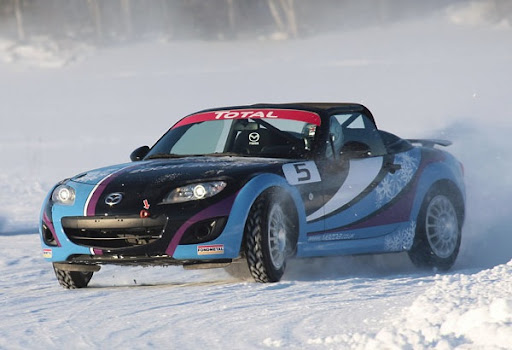 Tyres, and the Fondmetal wheels they sit on, are one of the few modifications made to turn a standard roadster into a race car. Safety dictates a roll cage, race seat and harness, plus there's a rather nifty exhaust, a trick ECU and uprated brakes and fluids. Oh, and a variety of paint schemes that range from snowflakes (Spain) ... 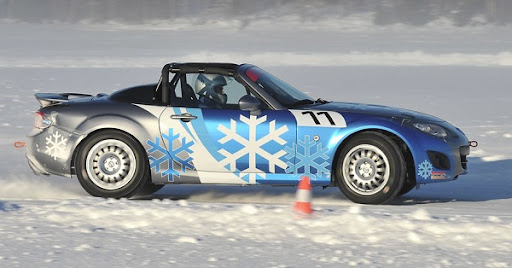 ... to a bear clutching at a pair of missiles (the Russian team). 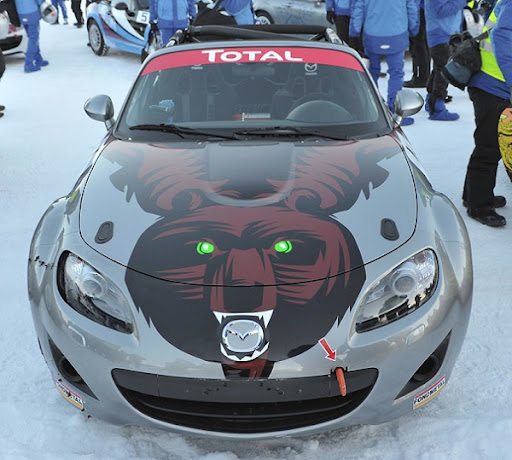 The event is split over two days with the first set aside for practice and qualifying. Such is the length of the track that the 20 minutes driving time allotted barely makes for four laps. After my first effort - and, with all that flaying of arms, it really is an effort - I'm grinning ear to ear, but disappointingly slow. There are some 45 corners to learn and I'm not sure I'll ever really know where I'm going, although it is clear that I need to pop some bravery pills to make up time on the third gear straights where the car fishtails spectacularly. 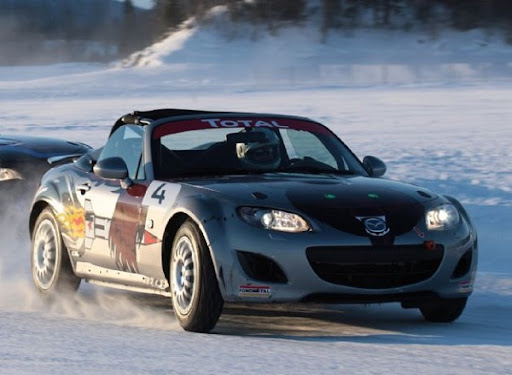 Qualifying sees me get caught up with a rival who goes off in front of me and it's all I can do to avoid joining in. My best lap includes a full 360-degree spin so is some 30 seconds off the fastest lap. My worst involves being towed out of a snow bank.

It has been truly magnificent couple of days and really ought to become an annual event. But next year I want a lightsabre wielding dragon in a Spitfire painted on my car.

I have to applaud Mazda's sense of fun in decorating the vehicles provided for the race. I've included several photographs of individual cars above, to show the creativity of the artist(s) concerned. Certainly, they made a spectacular contrast to the snow and ice!

Here's a video report about the event. It's in German, but the language is irrelevant once the racing starts! Note the careful use of throttle by the drivers, who've obviously learned the hard way that 'putting the pedal to the metal' isn't the most productive way to drive on ice . . .