Yet more ways for Big Brother to find you


I'm continually impressed by new developments in the field of tiny unmanned aerial vehicles (UAV's) and their technology; but this one is especially eye-opening. Ares reports:

California-based TiaLinx has launched a mini-UAV carrying a miniature millimeter-wave radar able to detect someone hiding motionless behind a wall - by sensing their breathing. The Phoenix40-A UAV carries a "fine-beam ultra-wideband, multi-gigahertz radio-frequency sensor array" designed for standoff surveillance of compounds and other premises. 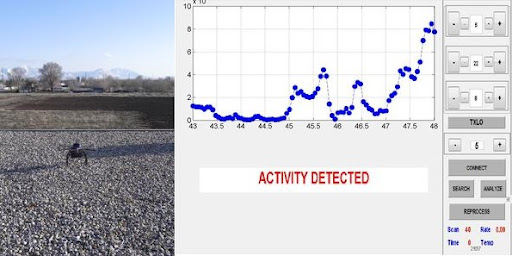 The TiaLink UAV hovering over a concrete roof, and (right) the output from its sensors. (Images courtesy of TiaLink.)

According to TiaLinx, the RF scanner transmits highly directional wideband signals that can penetrate a reinforced-concrete wall at an extended range, The system will detect someone hiding behind the wall by sensing the motion of their chest as they breathe, the radar's developers say. Less ominously, such a sensor could be used to find people buried in collapsed buildings after an earthquake.

Nor is such technology limited to UAV's. Attach that sensor payload to something like the iRobot 110 FirstLook:

and you'll have something that can crawl through corridors, penetrate wreckage, etc. to find anyone, anywhere. I can see police departments absolutely loving this technology to help them locate armed suspects and neutralize them without having to send their officers into harm's way. On a less happy note, Big Brother-style governments will love it for the same reason . . .

Joe Bageant died yesterday. He understood America better than anyone I've ever read or have spoken with. Here is some of his insight: