I guess that's one way to make your product stand out!

A footwear manufacturer in China has made an electric car out of a giant shoe.

It can carry two people up to 250 miles at speeds of up to 20mph on a single charge of the battery underneath the driver's seat.

The leather 'bodywork' is made in the same way as a normal shoe but on a bigger scale, using the hide of five bulls. 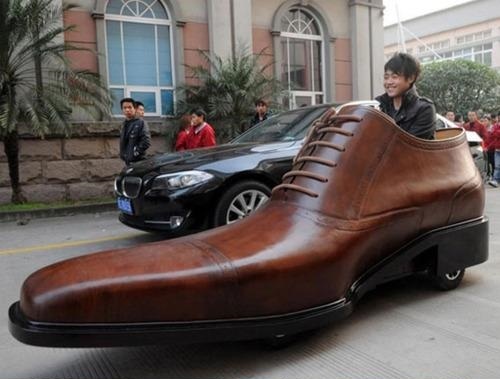 The company demonstrated its bizarre vehicle outside its headquarters in Wenzhou in eastern China's Zhejiang Province.

Workers queued up for the chance to drive the shoe car which is 10ft long and more than three feet high.

Company president Wang Zhengtao says it is designed as a promotional tool and he plans to make 40 for stores around the country.