I'm amazed to learn that a complete Megalodon jaw is to be auctioned in Dallas, Texas in June. I didn't know that complete jaws of these prehistoric monsters were still available outside museums. The Daily Mail reports:

It makes the Great White shark in Jaws look like a goldfish.

But this giant prehistoric shark jaw comes from the largest predator ever to have existed on Earth. 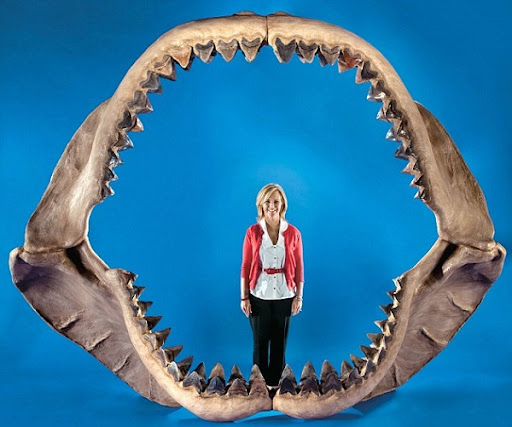 The 16-metre long Megalodon shark, which died out 1.5million years ago, was once the true king of the ocean, weighing an awesome 100 tons.

It took famed fossil hunter Vito 'Megalodon' Bertucci almost 20 years to reconstruct the jaw, the largest ever assembled and which measures 11ft across and is almost 9ft tall.

The late Mr Bertucci found fragments of the ferocious species in the rivers of South Carolina.

Now that's an impressive bite! Here's a clip from a BBC documentary about these beasts.

Not the sort of thing I want to think about, swimming beneath me . . . I reckon I'd be nothing more than an hors d'œuvre to that monster!

G'day Peter
35-odd years ago when I was at high school & reading -everything- I could find about sharks, I found a report from a USN or USCG vessel approx 80ft long which stated that one of these beasties swam past which was longer than the vessel itself. Incident might have been in the '40s or '50s
Carcharodon megalodon may not be quite as extinct as we might like.
regards
Alan

Were those rivers that much bigger then?

Or is it probable that the collection of bits and pieces enabled the "re-construction" of something larger than life?

Has anyone found a complete fossil record? Anywhere, all in one piece?