The story behind the toilet bomb!


I've known for many years about a rather odd 'bomb' dropped on North Vietnamese forces by a Navy attack squadron in the 1960's. The 'ordnance' was - of all things - an old toilet! 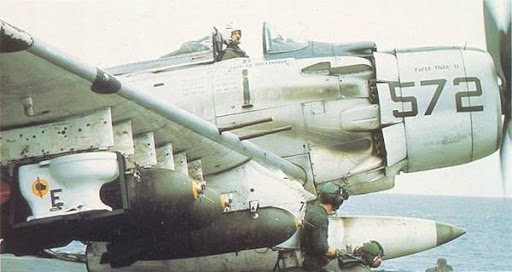 Thanks to an e-mail from reader Roger D., I've learned the story behind the 'bomb'.

In October 1965, CDR Clarence J. Stoddard, Executive Officer of VA-25 "Fist of the Fleet", flying an A-1H Skyraider, NE/572 "Paper Tiger II" from Carrier Air Wing Two aboard USS Midway, carried a special bomb to the North Vietnamese in commemoration of the 6 millionth pound of ordnance dropped. This bomb was unique because of the type . . . it was a toilet!

The following is an account of this event, courtesy of Clint Johnson, Captain, USNR Ret. Captain Johnson was one of the two VA-25 A-1 Skyraider pilots credited with shooting down a MiG-17 on June 20, 1965.

The 572 was flown by CDR C. W. "Bill" Stoddard. His wingman in 577 (which was my assigned airplane) was LCDR Robin Bacon, who had a wing station mounted movie camera (the only one remaining in the fleet from WWII).

The flight was a Dixie Station strike (South Vietnam) going to the Delta. When they arrived in the target area and CDR Stoddard was reading the ordnance list to the FAC, he ended with "and one code name Sani-flush". The FAC couldn't believe it and joined up to see it. It was dropped in a dive with LCDR Bacon flying tight wing position to film the drop. When it came off, it turned hole to the wind and almost struck his airplane. It made a great ready room movie. The FAC said that it whistled all the way down.

The toilet was a damaged toilet, which was going to be thrown overboard. One of our plane captains rescued it and the ordnance crew made a rack, tailfins and nose fuse for it. 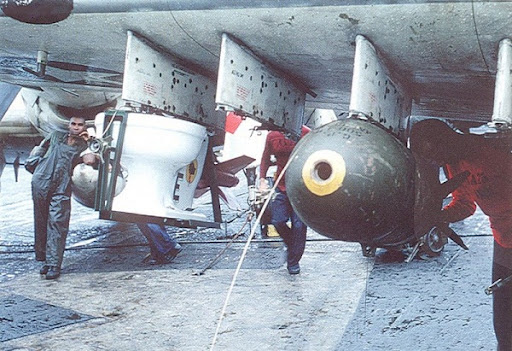 Our checkers maintained a position to block the view of the air boss and the Captain while the aircraft was taxiing forward. Just as it was being shot off, we got a 1MC message from the bridge, "What the hell was on 572's right wing?"

There were a lot of jokes with air intelligence about germ warfare. I wish that we had saved the movie film.

Sounds like a good time was had by all . . . except, perhaps, any North Vietnamese forces who were on the receiving end!

Take a closer look at the photo of the man standing next to the wing-loaded toilet.

It would take a giant of a man to sit on that thing. It's the size of a bathtub and is half as tall as he is.

Having been a sailor myself, I know the shenanigans sailors will pull, but I would sure like to know the "real" story behind that one.

Although I was Air Force, I believe you need to look closer at the person leaning that Roy references. I believe he is actually leaning on the centerline fuel tank of the bird behind this one.

Good one :-) And yes the gent is leaning on a drop tank behind the airplane, not blocking the toilet per se... Things were a 'bit' different back then, and I'll almost guarantee the enlisted folks were the originators of this little 'bomb'. :-)

My kingdom for that video.

Gives a whole new meaning to bombing the crap out of the enemy.

Jon and Old NFO are right; check out the Ordnanceman (wearing the red jersey) doing something to the tailfins on the Mk82 inboard of the "Sani Flush" for a better size comparison.

I clicked on the wikipedia link to the Midway page; the photo there of the ship taken in Nov. 1974 caused a bit of frisson. I was aboared that day - we would have been winding up my last at-sea period aboard, probably starting back towards Yokosuka from Subic (or possibly returning from Hong Kong to S.B. - it's been 35+ years now, memory fades).

From the looks of things in the picture, aircraft recovery operations have ended shortly before and the recovered aircraft are being re-spotted to their usual maintenance spots around the deck in preparation for the next launch cycle. The clump of A-7 aircraft along the port side mid-ships are spotted right above my squadron's ordinance and electrician maintenance shops respectively with the plane captain's shop some 30' forward of that.

Wouldn't want to live that life again, glad I did though. Thanks Peter.

The call from the bridge had me laughing hysterically! That is pure comedy gold.

This post has now been linked on teh Facebooks.

There is a video of that online. It may be found at:
http://eugeneleeslover.com/Humor/Toilet_bomb.html

1971, USS Ranger, CVA-61, first cruse and first sea going squadron VA-25, first war. Was introduced to to then CDR Ed Greathouse, CO of VA-25, flying the A-7E, as I sat in the ready room of VA-25. All the new Petty Officers were given a welcome aboard meeting. We then took a chair and was told of the story, by the command master chief of CDR Greathouse shooting down a MIG with the A-1H Skyraider he was piloting. Then the CDR was introduced as the CO and then we went through the rest of orientation to prepare us for the next 9 months at war.
Little did we know in about two years it would be all over as a loss for us. And the military be punished for it to this very day day.
Heltau

The reason the toilet looks so big is probably due to the use of a wideangle lens. The other pics show it as a normal size toilet.

It just looks big because the guy is behind it giving you a forced perspective of it being huge. It's a common movie trick. Follow the bottom of the wing back to the guy and you can tell he's not actually next to the toilet.

Bob Sullivan AE-3 VA25 1962 1966
I was a member of one of the loadng crews that were up there the night the toilet was hung , myself and other loaders went over to take a look at the toilet -my understanding was that one of our plane capt's had found the damaged toilet (look close at the lower flange on the outbd side of the unit)and started the ball rolling , Ord shop fashioned the metal frame and attached the fin and fuse , I did help put it on the wing ( didn't really need my help) this was indeed to celebrate 6,000,000 lbs or ord . - at the first 1,000,000 lbs they gave us a cake ( I've got the picture of that with the crew)
Regarding the statement about the Mig shoot down -it was Lt Clint Johnson and his wing man ltjg Charlie Hartman who actually shot the mig down - ED Greathouse was senior Pilot in charge of the 4 plane RESCAP mission. regards rls