A happy ending to an emergency landing


In September last year, a Tupolev Tu-154M airliner of Alrosa Mirny Air Enterprise was operating as Flight 514 from Udachny to Moscow in Russia. It had to make an unscheduled emergency landing at a closed, disused airport at Izhma in Russia. Wikipedia reports:

Flight 514 was over Usinsk, at an altitude of 10,600 m (FL 348) when the first signs of a problem were noticed at about 06:59 local time (02:59 UTC). Later, a complete loss of electrical systems occurred, which resulted in the loss of navigational systems and the loss of electric fuel pumps, leaving the aircraft with just 3,300 kilograms (7,300 lb) of useable fuel, enough for just 30 minutes flight. The loss of the electrically driven pumps prevented transfer of fuel from the wing tanks to the engine supply tank in the fuselage. At about 07:47, the emergency authorities at Izhma were informed that the aircraft may be making an emergency landing at the airport there. Izhma Airport is a former airfield that is now used only for helicopters, and the 1,325-metre-long (4,347 ft) runway is closed and abandoned. The airfield, having closed to fixed-wing aircraft in 2003, was not marked on then-current maps. 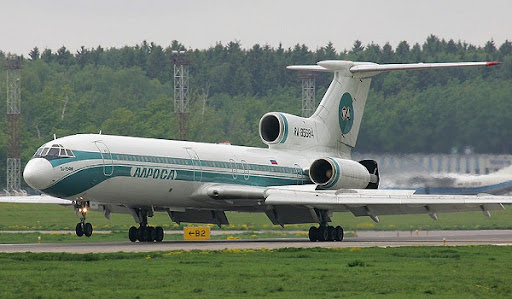 The passengers were moved to the front of the aircraft. The electrical failure also caused a loss of the radio system, flaps and slats. Two attempts to land were aborted. On the third attempt, a successful emergency landing was made at Izhma at 07:55 local time. The aircraft overran the runway by 160 metres (520 ft), and sustained some damage in the process. The aircraft landed at a speed of 350 to 380 kilometres per hour (190 to 210 kn), faster than normal, due to the lack of flaps. Although the flaps are powered by hydraulics, the switches operating them are electrical. All nine crew and 72 passengers evacuated using the aircraft's evacuation slides. No injuries were reported.

Russian authorities launched an investigation into the accident. ... On 14 September 2010, the report indicated that the batteries had self-overheated, suffering a thermal runaway. This affected the entire electrical system, navigation system and radio system.

There's more at the link. Here's a Russian video report on the plane after the forced landing.

Today, Flight Global reported that the aircraft had been repaired and flown out of the (still-closed) airport.

Pilots in Russia have managed to extract an Alrosa Tupolev Tu-154 from a remote military airfield, six months after an in-flight power loss and emergency landing left the aircraft stranded.

Tupolev says it carried out a technical study on the state of the aircraft, and that test pilots from the Russian state aviation research institute GosNII were selected to fly the jet out.

"After repair the aircraft will continue to operate for Alrosa," it adds. The airline is based in Mirny, eastern Russia.

Russian federal aviation supervisor Rosaviatsia says that, following the recovery, the aircraft was flown to the city of Ukhta, 160km south of Izhma, where it landed safely at 11:13.

The Tu-154 will undergo further checks before being flown to the Aviakor aircraft plant in Samara for additional work.

Again, more at the link. Here's a video report on the take-off. Interestingly, the second part of the video (from 0m. 56s. onwards) shows a computer graphics reconstruction of the forced landing, followed by some pictures of damage sustained by the airliner during its off-runway excursion into the trees.

Wikipedia reports that, to honor their successful landing of the airliner under such difficult conditions (saving the lives of all aboard);

"The pilots of Flight 514, Andrei Lamanov and Yevgeny Novoselov, were made Heroes of the Russian Federation. The other seven crew members were awarded Orders of Courage."

Looking at that CGI reconstruction of their landing, I'd say those awards were richly deserved!

A final note: the Tu-154 may be on the verge of being withdrawn from airline service altogether. Flight Global reported earlier this month that the aviation authorities in Russia "are contemplating introducing a blanket ban on using Tupolev Tu-154 aircraft unless their reliability is improved". The aircraft's been in service since 1972, so it's far from state-of-the-art, and it hasn't benefited from the in-service upgrades that keep many Western airliners operating safely for many years.

Tell you what: it may be old and out of modern features, but it must have been built like a tank to withstand a landing like that without breaking apart AND still be able to take-off again!

To this untrained eye that Tu-154 sure looks a lot like the old Boeing 727.

Heh. Reminds me of 1968 in Vietnam when a charter flight (DC-8 I think) inbound with a full load of fresh Marines for DaNang mistakenly landed at Marble Mountain. They stopped safely on the 3,000 foot runway, but they had to strip the plane of everything removable like seats and fuel to get out and drop right back in at DaNang a couple of miles away.

Say what you want about the quality (and yes, it looks like it was built stoutly), but that flight crew deserves all the awards.

Peter - did you ever read the story of the Gimli Glider? One of my favorite stories. In a situation where a 767 went dark in flight - all those glass cockpit displays lost power and turned into black eyes, the Boeing guys had the foresight to have designed in a RAT, a ram air turbine, that generated just enough power to run radios, and a few important controls.

One telling of the story. I met a guy (through email) who had flown her, after telling that story.

Well, that calls for a drink! Actually a double round, crew and pax!