I can hardly believe the guts and determination shown by an Australian fisherman. The Sydney Morning Herald reports:

A fisherman has survived a crocodile attack after fighting the reptile for 40 minutes and clinging to mangroves on the bank of a creek in far north Queensland.

Todd Bairstow's father Luke told brisbanetimes.com.au the four-metre long crocodile tried to drag his son into the water for a death roll, but the 28-year-old was able to keep his head above the shallow water and eventually grab onto the mangroves.

Mr Bairstow, a Rio Tinto mine worker, was fishing on the bank of Trunding Creek, Weipa, about 4pm yesterday when the crocodile attacked.

His close friend Kev Beven happened to be checking the creek level on the opposite side of the creek from the carpark of the Albatross Bay Restort when he heard Mr Bairstow’s cries for help and came to his rescue.

Mr Beven struggled to recount the horrifying experience this morning.

"All I can say is that I grabbed him onto him as best I could. He was wet and slippery. By the time I got to him he was up to his neck in the water," he said.

"I stayed on the bank and I told him to hold onto my legs."

Eventually the crocodile gave in.

"The crocodile let go and I managed to pull him out, but I couldn’t get him up over the mangroves."

More locals soon rushed to the scene and helped pull Mr Bairstow to safety and chase off the crocodile.

That would be a salt water crocodile, perhaps the deadliest 'version' of the species, and very dangerous to humans. 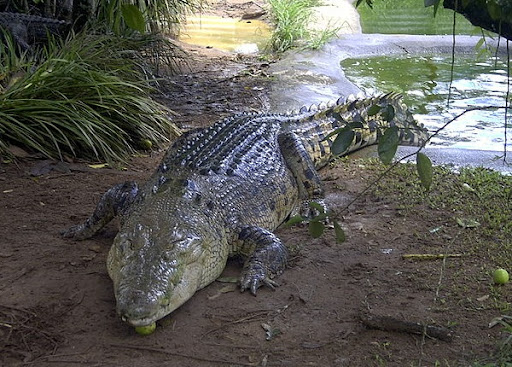 A four-meter specimen (that's about 13 feet long) would be very large indeed, weighing close to a ton, and really deadly. For that reason, I suspect this one wasn't actually that large, because if it was, it'd have been more than strong enough to tear a man loose from whatever he was grasping. Nevertheless, it was certainly very dangerous, as Mr. Bairstow's injuries show. Hats off to him for his courage in fighting it for so long, and so successfully!

He is VERY lucky, and I agree, it was probably a smaller one.