I was fascinated to read about pre-Incan conch 'trumpets', apparently up to three millennia old, that were recently played once more at a conference in Mexico. Wired magazine reports: 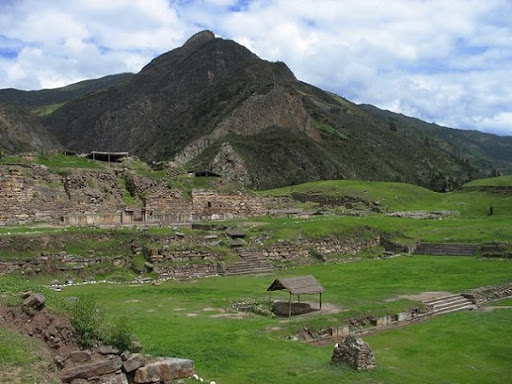 The ruins of Chavín de Huántar (image courtesy of Wikipedia)

Polished, painted and etched with symbols, the shells had well-formed mouthpieces and distinct V-shaped cuts. The cuts may have been used as a rest for the player’s thumb, says study coauthor Perry Cook, a computer scientist at Princeton University and avid shell musician, or to allow the player to see over the instrument while walking.

To record the tunes and understand the acoustic context in which the instruments, called pututus, were played, the researchers traveled to Chavín.

As an expert shell musician blew into the horn, researchers recorded the sound’s path via four tiny microphones placed inside the player’s mouth, the shell’s mouthpiece, the shell’s main body and at the shell’s large opening, or bell. Similar to a bugle, the instruments only sound one or two tones, but like a French horn, the pitch changes when the player plunges his hand into the bell. 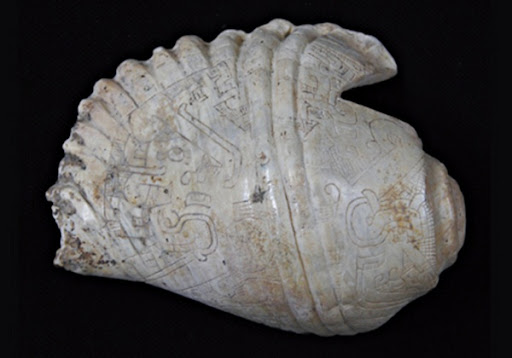 The team used signal-processing software to characterize the acoustic properties of each trumpet. Following the sound’s path made it possible to reconstruct the ancient shell’s interior, a feat that normally involves sawing the shell apart or zapping it with X-rays.

The researchers also wanted to know how the site’s ceremonial chamber, a stone labyrinth with sharply twisting corridors and ventilation shafts, changed the trumpet’s sound. To find out, the team arranged six microphones around the musician and reconstructed the sound patterns on a computer.

If the trumpets were played inside the stone chamber in which they were found, the drone would have sounded like it was coming from several different directions at once.

Here's a video report showing how a Mayan-era conch 'trumpet' was played.

Imagine yourself in the shoes of a primitive 'believer' in whatever the deity(ies) of the Mayans and pre-Incas might have been. You're led into a darkened temple (which might be a building, or a cave, or a complex of tunnels). You hear those sounds from various directions, in different notes and pitches, echoing all around you . . . and your superstitious mind does the rest.