I was surprised to read that one of Hitler's bodyguards is still alive. He seems to have become something of a legend in his own lifetime. The Daily Mail reports:

Rochus Misch was by the German leader's side for five years and even saw the Führer after he committed suicide as the Russian tanks closed in. He is thought to be the last remaining member of the group who hid in that famous Berlin bunker. 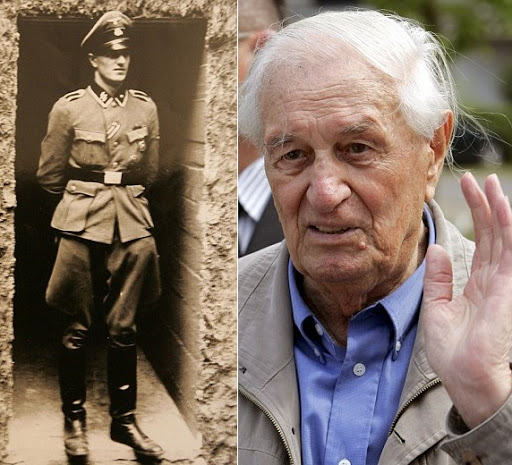 His proximity to Hitler has caused him to become something of a celebrity, and his character has appeared in a number of films.

He was even consulted by Christopher McQuarrie, the writer who created Valkyrie, the 2008 film about an assassination attempt on Hitler's life.

Hollywood actor Tom Cruise, who starred in the film, was not keen to converse with Misch and told the Los Angeles Times: 'I didn't want to meet him. Evil is still evil, I don't care how old you are.'

But the former bodyguard has a cult following. However, at the age of 93 and using a walking frame to move around, he can no longer deal with all the correspondence.

He told newspaper Berliner Kurier that, with most of the letters he receives asking for autographs, it was 'no longer possible' to reply because of his age.

'[The letters] come from Korea, from Knoxville, Tennessee, from Finland and Iceland - and not one has a bad word to say,' said Misch, who is believed to be the last man alive to have seen Hitler and other top-ranking Nazis in the flesh.

Through his position his fame rose and in the past Misch used to send fans autographed copies of wartime photos of him in a neatly pressed SS uniform.

Now the incoming fan mail, including letters and packages, piles up in his flat in south Berlin's leafy Rudow neighbourhood, less than two kilometres from the Führerbunker.

His memoirs, 'The Last Witness,' were published in 2008 in Germany and are in the works to become a feature film.

With the death of Hitler Youth courier Armin Lehmann on October 10, 2008, Misch is the last survivor of the Führerbunker.

I'm not sure about Tom Cruise's reported reaction to Mr. Misch. I have no information to suggest that he, personally, was or is an evil man (although I have no doubt whatsoever that he served an insanely evil master!). I can't hold it against him that he served his country as best he could, according to his lights. He certainly paid a heavy price, enduring imprisonment in the Soviet Union from 1945 until 1954. (If you want an idea of how tough that must have been, consider that almost half a million German prisoners of war died in the Soviet Union [out of approximately two million in total who were captured]. Furthermore, "the ultimate fate of 1,300,000 German POW's in Allied custody is still unknown; they are still officially listed as missing." Many of these [probably the large majority] fell into Soviet hands, because far more German units fought [and were lost] on the Eastern Front than in other campaigns.)

At the age of 93, Mr. Misch is doubtless preparing to render an account of his life to the Judge whom we all must face one day. May he seek, and find, mercy for his sins. I'll begrudge no man that . . . especially because I'll have great need of God's mercy myself!

Fan mail????
Why so many folks are still so fascinated with the last days of that monster and those who were there, is beyond me...
Time to let go and forget that lot.

We all need to ask for God's Mercy

"I have no information to suggest that he, personally, was or is an evil man."

What? Are you kidding me? How about his Nazi SS uniform? That just screams "I am evil!"

The SS was totally evil in everything that they did. I might understand someone who was Wehrmacht to have an excuse.