I've published video clips of base jumpers from time to time. Whilst it's a visually enthralling sport for spectators (and doubtless even more so for participants), it's always been a dangerous undertaking. I was therefore saddened, but not surprised, to read of the death of yet another base jumper, Mr. Gary Harbird of England. The Daily Mail reports:

He was jumping from the infamous High Ultimate Base jump when he crashed into the rock surface.

The Swiss resort is a favourite amongst adrenalin junkies, but is also one of the most dangerous. At least 21 base jumpers have died in recent years at the site. 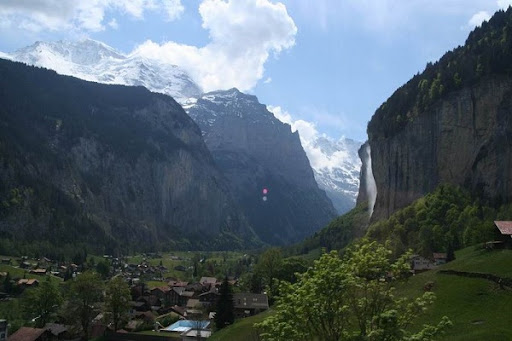 Lauterbrunnen Valley in Switzerland, with the Lauterbrunnen Wall (site of the
High Ultimate base jump) in the background. (Image courtesy of Wikipedia.)

His sister said today that the family were too upset to speak to the media.

But members of the UK skydiving and base jumping community paid tribute to Mr Harbird via online message boards.

Base jumping is one of the world's most dangerous recreational activities and in 2002 it was estimated that there were 60 fatalities, which accounted for 1.7 per cent of participants.

Here's a video clip of base-jumpers leaping off the same mountain where Mr. Harbird met his death. Spectacular . . . but you can see just how incredibly dangerous it is, too. One mis-step when jumping off the cliff face, or a moment's delay in pulling your ripcord, and disaster will be there to greet you. (I highly recommend watching the video in full-screen mode.)

May Mr. Harbird's soul rest in peace, and may his surviving family receive what comfort is possible under such tragic, unnecessary circumstances.

Gene pool just got a little more chlorox... sorry, but the ONLY ones I feel for are his family. He was stupid and got away with it for a period, but that came to a singular end, as all of them will sooner or later.

Being his family i thank you for the sympathy...but mr. harbird was not a reckless skydiver
/basejumper...he has well over 8k jumps under his belt with 18 years in the field ..and jumping for the last 12 of them. he was the best of the best in his profession and in life...he always knew he wouldnt live a long life..and he was ok with it. He LIVED his life...i cannot say that about 1 other person i know. He endangeder himself...noone else..he loved what he did...he loved life...he loved his friends and family...