Today's award goes to a gang of what are described as 'cowboy builders' in China, who bit off rather more than they could chew.

Angry home owner Liu Taixiang has dug up a £20,000 [about US $31,760] fortune after a gang of cowboy builders tried to bulldoze him out of his house.

The 82-year-old war veteran had refused to budge when property developers attempted to force him out of his home in Binhai, eastern China. 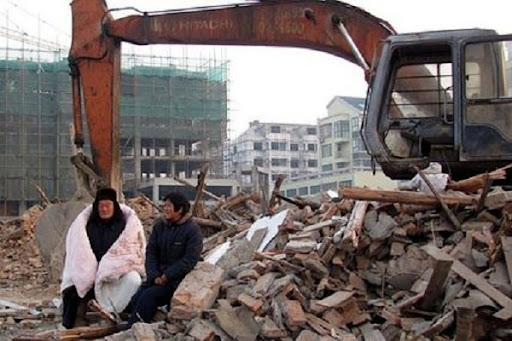 And when they tried to demolish the property at night, sharp-eyed Liu was waiting and saw them off with a home-made arsenal of clubs, knives and missiles.

Now Liu is auctioning off the £20,000 digger the fleeing wrecking crew left behind.

"The police have told me that what they were doing was illegal. So if they want to claim it back, they have to confess to being crooks. If they don't come forward, police say I am the new owner," he explained.

I love a tough old guy! A war veteran, too. That'll teach a bunch of young punk crooks not to assume that all old men can be pushed around!

Oops! Link provided. Thanks for the heads-up.

Good for him! Hope he gave some of them a few lumps as they beat feet.